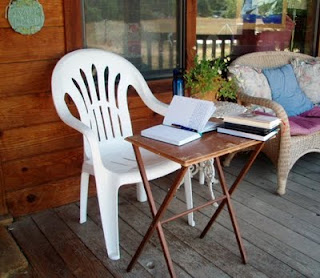 I love reading and writing on my front porch, especially when the sun starts dipping behind the tall trees, then beyond the violet-blue mountains cupping our little village in its palm. Over the past few September days, the nights have become quite cool, sinking to the mid-40s, and the days have been pleasant in the high 70s to low 80s. It's perfect porch weather!

So here are more of my summer reads and reviews. I'm remaining ahead of pace for reading eighty books in 2019, currently three books to the good according to Goodreads, I believe.

Letters from Home by Regina Jeffers
My rating: 4 of 5 stars

This story was not at all what I was expecting. As Regina Jeffers has penned many excellent Jane Austen variations and continuations, I was fully expecting this novella to be a "take" on Persuasion. However, this novella chronicles a young widow, Mrs. Faith Lamont, attending a Christmastide house party as her beautiful but selfish cousin's companion.

The new gentleman of the house, who had fought in the same military company as her husband (unbeknownst to her) had fallen in love with the woman's letters which her husband had read aloud to the entire company, although her husband viewed her beautiful earnestness and love for him as a farce to be laughed at.

However, Lord Simon Langford had fallen in love with the letters: their beautiful descriptions of England--of home--had captured his mind and his heart and had also comforted many of the other men, a development that George Lamont's young wife had never intended. Faith was embarrassed beyond belief to discover her husband's betrayal; how could he have read these most private and personal of letters aloud to the entire company?

But Simon, injured in the same battle that took George Lamont's life, is sick and tired by the usual ladies of the Ton. He finds himself delighted to have found a woman of true quality, but Faith is far more reluctant. Can Faith get past her humiliation at her husband's hands? Can Simon marry a poor war widow and remain part of London society?

Regina Jeffers never disappoints. Although this novella was not at all what I had expected when I ordered it, I found it delightful and extremely compelling. It's a quick read; in fact. I believe I read the whole thing easily within 24 hours. And while it is a quick read, it is also a highly satisfying one.

The Contract by Melanie Moreland
My rating: 4 of 5 stars

When this book was first released, I had checked out a sample of it and had really enjoyed it. In addition, one of my fanfic friends, Jeanne McDonald, had highly recommended it, and I knew I would have to finish reading it at some point.

I think that this story was first a Twilight fanfic before it was edited into an original contemporary romance. Sometime in the last couple of years, I had purchased the e-book but somehow never managed to read it. When I was looking for a somewhat familiar book to read (sometimes I don't want to take the mental energy to "meet" new characters), I rediscovered this book on my tablet.

I quickly re-read the first two chapters I had received as the sample and raced through the rest of the novel, finding it unusually compelling and definitely a page-turner. The character development, the plot, the romance--all of it took me into a world that seemed both completely foreign yet oh-so-familiar. I absolutely LOVED this book and am hoping to purchase the second volume of the series when I get paid for some essay grading.

This book chronicles an incredible transformation of one man who falls for a woman far too good for him. In his stunted state, mostly due to his neglected childhood, he seems unable to love anyone, including himself. But the influence of an unselfish woman, her "aunt" with Alzheimer's, and a new cooperative work environment help this man to become a different person in a fairly realistic way.

I definitely fell in love with these characters--all of them! It's a heart-warming and heart-rending tale, and it's one that I highly recommend.

(NOTE: I save "5" for the classics or for absolutely extraordinary current writing; a "4" is an "excellent" for me while a "5" is "extraordinary.")

A Gift of Ghosts by Sarah Wynde
My rating: 4 of 5 stars

An intriguing premise to this paranormal tale. Akira Malone, a physicist, is hired by General Directions, a vague and somewhat mysterious entity owned by Max Latimer, in a small Florida town called Tassamara. Zane Latimer, the man who hires her and the son of the owner of the company, seems to do so reluctantly, and she isn't really sure why she accepts their offer to move from her academic position in California to this rather ephemeral job across the country.

But she soon discovers the mystery behind General Directions and the reason why she is hired. First of all, the firm is headed by members of the Latimer family, including the handsome Zane to whom she reports weekly. In fact, her hiring itself was a series of tests...but not of her intellect nor of her scientific research. Although she continues her research in the area of sonoluminescence, she quickly finds out that she has been hired for a very different reason--a very personal reason for the Latimer family.

I found this book quite compelling, considering that I started reading it only last night and finished it the next day. It's the first of a series, but I'm not sure I can continue it since I will have to purchase the books through Amazon since they aren't available through our library system. With an extremely limited book budget (that encompasses 99-cent bargains through BookBub and Book Gorilla which is how I obtained this first book), I can't afford to continue reading the series.

If one enjoys stories based in the paranormal and a rather heady romance, then this book--and likely the series--will definitely appeal. The climax of the story was excellently written, and I found the whole book to be a delightful and truly mesmerizing experience.

Murder at Morrington Hall by Clara McKenna
My rating: 4 of 5 stars

A delightful first mystery in the Stella and Lyndy mysteries set in 1905. Lyndy, a young viscount, is amused by the young American woman, Stella Kendrick, whose father is the typical "rich ugly American" with no class but somehow became a millionaire by breeding top racehorses in Kentucky. Stella, however, is one of those Americans who possesses excellent intentions but manages to make a muck out of every honest attempt, to her eternal chagrin.

Stella and her father arrive at Morrington Hall where she discovers her father's plan: Mr. Kendrick will give the Earl of Atherly, Viscount Lyndhurst's father, the sire of the most promising thoroughbred in a generation in exchange for Lyndy marrying Stella. Having a daughter with a title seems to be the most expeditious way to get rid of Stella for Mr. Kendrick, and the father has no compassion for the position in which he has thrust his daughter: she is basically treated as part of a horse swap which does not endear her to her father's plan in the least.

Stella rebels immediately, but her argument with her stubborn and quite cruel father is cut short by the murder of the vicar who was to marry them the next day. Lyndy is afraid that his best friend may be the murderer while Stella also wishes to reveal the identity of the killer. Working together to solve the murder, Lyndy and Stella develop an admiration for one another--and perhaps even more. Stella discovers Lyndy's kind heart while Lyndy admires Stella's courage and sense of humor.

I found this first novel in the series quite compelling. Well-written, nicely detailed, with realistic and likable characters plus a wry sense of humor, I think that Clara McKenna's series will become quite successful. I know that I will be awaiting the next book in this series with a great deal of anticipation!! Brava, Ms. McKenna, on a wonderful opening book of the series!!

Leaving Everything Most Loved by Jacqueline Winspear
My rating: 4 of 5 stars

This tenth book in the amazing Maisie Dobbs series was rather heartwrenching. A woman from India was discovered, shot through the head, along the banks of the Thames. When the police fail to find any clues, they give up the case and move on. But when the murdered woman's brother shows up in London several months later seeking answers, the police at Scotland Yard come to Maisie Dobbs and ask for her assistance.

Maisie finds herself at a crossroads. She loves James Compton, yet the idea of giving up her hard-won independence in order to marry a lord terrifies her. James presses Maisie to make a decision, and she will have to search her heart and soul to see which way she will decide. And she also meets some amazing women as she searches for the killer od beautiful Usha Pramal, a former governess working in London as domestic help.

Maisie's assistant, Billy, also finds himself at a crossroads as he returned too soon from injuries that nearly cost him his life, and he is temporarily (or perhaps permanently) unable to do his job. Sandra, Maisie's other employee, is also seeking other work as well.

Perhaps, as Maisie is taken deeper and deeper into the people and culture of India right in her beloved London and as her father finds love at last, this is time for Maisie to travel, to find herself, and to be able to give James a firm answer, one way or another.

A brilliant and heart-rending book that had me in tears several times, the Maisie Dobbs series continues to deliver a thoughtful and thought-provoking heroine deeply involved in her calling yet with a loneliness within that may prevent her from ever truly loving.

Beautifully written, wisely developed, and carefully plotted, this tenth book (of fifteen books in the series at this time) is another standout in the series...as they all are, somehow.

Finally Mrs. Darcy: A Pride and Prejudice Novella by Leenie Brown
My rating: 4 of 5 stars

A sweet novella in which a widowed Elizabeth once again encounters Fitzwilliam Darcy--a set-up managed by her uncle-by-marriage--and the sparks fly between the two of them immediately. Very little trouble remains in the way of their romance at this point, later in life. It's a story of second chances, of new beginnings, and of a true love that never wanes.

Telling much more would give away too much, but I will say that this is a sweet novella with a very happy ending, indeed!

Thanks for reading my reviews, and please let me know if you have read any of these books--and what you thought of them--or if you would like to read them. I have included the reviews of one of the Maisie Dobbs mysteries that I have been enjoying so much. I'm on a waitlist for the next Maisie Dobbs which has been my passion this spring and summer!

Posted by Susanne Barrett at 2:15 AM

Thanks for including "Letters from Home" in your reviews. The story was originally part of the "Christmas Ever After" anthology last year. I so glad you enjoyed it.

"The practices of Lent, resting on the foundation of the meditating day, help us to be both realistic and happy. The two go together in a way that consumerism can never fathom."