A Review: Eat This Book by Eugene Peterson 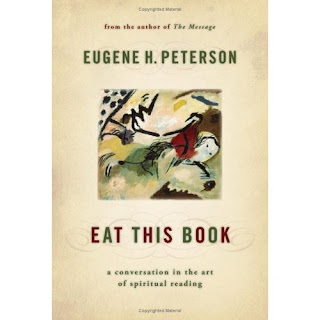 Eat This Book: A Conversation in the Art of Spiritual Reading by Eugene Peterson. Grand Rapids: Wm. Eerdmans, 2006. 180 pages.

I started this book last June, and at long last, I have finished it. It's not the book's fault, really. Our Logos reading and discussion group started up in July, and thus I have been reading books for our monthly discussions and have had to set aside Eat This Book far more often than I would have liked.

Dr. Peterson, best known for his popular translation of the Scriptures into modern idiomatic speech, The Message, is a man after my own heart in many ways. I attended a few lectures/discussions at Point Loma Nazarene University's Writers' Symposium by the Sea last February, and in addition to attending Anne Lamott's excellent discourse on writing, I was also unexpectedly amused and challenged by Eugene Peterson's rare public discussion. He is a true Renaissance man, turning off his television in favor of reading the great works of world literature. Literature has been instrumental in Peterson's work as both a pastor and as a translator, but especially in the former. He told us how reading Joyce's Ulysses helped him to see the value in each member of his congregation and how the study of Chaucer and Shakespeare shaped his translation of the Scriptures. Peterson also stated his belief that the first years of pastoral training should be devoted to the reading of great literature, then should proceed to the study of Hebrew and Greek, doctrine, church history, expository preaching, counseling, etc. Aaaah, now there's a pastor to whom I can relate!

To get back to his writings, Eat This Book is divided into three parts: 1) "Eat This Book" (Scripture as text, form, and script); 2) "Lectio Divina"; and 3) "The Company of Translators." Each section can be read independently of the others which made it very nice as I read this book in chunks some months apart. The first portion is rather brainy and academic, one I would skip unless the reader is especially interested in Biblical analysis and literary criticism. I found it intriguing, but that's because I am an academic at heart (or mind, whichever the case may be).

The second portion on lectio divina, the ancient monastic practice of "divine reading," was by far the most intriguing to me as I have taught the process at our church's women's retreat. I find this ancient mode of reading Scripture of vast influence in my own devotional life. If you look at the Sites of Interest in my sidebar, you will find a link on lectio that almost precisly mirrors the information Peterson gives. Basically, lectio divina is divided into four parts: lectio (reading the Scriptures); meditatio (meditating on the Scriptures); oratio (praying the Scriptures); and contemplatio (contemplating how the Scriptures can be lived, and then doing so!). The key to making lectio divina work is to use SHORT passages for applying the four modes of reading and starting with twenty-to-thirty minute time frames. Peterson explains the concept, application, and value of the ancient practice of lectio divina extremely well to the modern evangelical audience.

The third portion of Eat This Book discusses translation of the Scriptures. Peterson specifically addresses the issue of translating into modern idioms -- in other words, translating the Scriptures into language for the "common man" rather than elevating the language of the Scriptures which was meant to be read by and to ordinary people rather than by scholars and poets. Specifically, he accuses the beloved King James Version to have fallen into the "error" of elevated language as ordinary people in 1611 didn't speak the language of King James Version; only high church officials, poets, and the aristocracy used such diction and structure. It's an interesting idea that humbles my love of poetic translation and elevated language as, in my not-so humble opinion, Peterson ruined the Psalms in The Message. As I much prefer the extremely archaic and elevated language of the 1540 "Great Bible" to the King James, I'm not sure that I completely agree with Peterson on this assertion, although I do understand his major point of making the Scriptures accessible to all. And I do use The Message at times for my private prayers, although I still rely on the Psalter in the 1928 Book of Common Prayer which uses the 1540 translation of the Psalms.

Overall, Eat This Book is at the same time a scholarly and a down-to-earth examination of how we read, or can read, the Scriptures. I highly recommend this book to pastors especially, but also to those who desire to deepen their own reading of God's Holy Word. If you are to read only one part, I (obviously) would urge you to read the second portion of the book on lectio divina, a way of reading, meditating, praying, and applying the Scriptures that I have found extremely helpful in my private prayers and devotional times.
Posted by Susanne Barrett at 1:44 PM

TWENTY-FIRST SUNDAY AFTER TRINITY
THE COLLECT:
MERCIFUL Lord, grant to your faithful people pardon and peace, so that we may be cleansed from all our sins and serve you with a quiet mind; Through Jesus Christ our Lord, who lives and rules with you and the Holy Spirit, one God, now and forever. Amen. (References: Psalm 103.8; Hebrews 9.13-14; 10.19-22).
from The Book of Common Prayer 2011