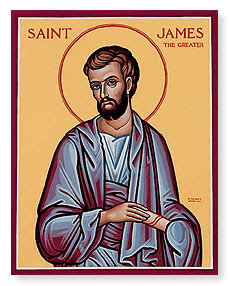 And of course today's Saint of the Day e-mail from AmericanCatholic.org celebrates the life of this amazing man of God, one of the "Sons of Thunder" who witnessed Christ's Transfiguration along with Saints Peter and John.

Saint James the Greater
This James is the brother of John the Evangelist. The two were called by Jesus as they worked with their father in a fishing boat on the Sea of Galilee. Jesus had already called another pair of brothers from a similar occupation: Peter and Andrew. “He walked along a little farther and saw James, the son of Zebedee, and his brother John. They too were in a boat mending their nets. Then he called them. So they left their father Zebedee in the boat along with the hired men and followed him” (Mark 1:19-20).

James was one of the favored three who had the privilege of witnessing the Transfiguration, the raising to life of the daughter of Jairus and the agony in Gethsemani.

Two incidents in the Gospels describe the temperament of this man and his brother. St. Matthew tells that their mother came (Mark says it was the brothers themselves) to ask that they have the seats of honor (one on the right, one on the left of Jesus) in the kingdom. “Jesus said in reply, ‘You do not know what you are asking. Can you drink the cup that I am going to drink?’ They said to him, ‘We can’” (Matthew 20:22). Jesus then told them they would indeed drink the cup and share his baptism of pain and death, but that sitting at his right hand or left was not his to give—it “is for those for whom it has been prepared by my Father” (Matthew 20:23b). It remained to be seen how long it would take to realize the implications of their confident “We can!”

The other disciples became indignant at the ambition of James and John. Then Jesus taught them all the lesson of humble service: The purpose of authority is to serve. They are not to impose their will on others, or lord it over them. This is the position of Jesus himself. He was the servant of all; the service imposed on him was the supreme sacrifice of his own life.

On another occasion, James and John gave evidence that the nickname Jesus gave them—“sons of thunder”—was an apt one. The Samaritans would not welcome Jesus because he was on his way to hated Jerusalem. “When the disciples James and John saw this they asked, ‘Lord, do you want us to call down fire from heaven to consume them?’ Jesus turned and rebuked them...” (Luke 9:54-55).

James was apparently the first of the apostles to be martyred. “About that time King Herod laid hands upon some members of the church to harm them. He had James, the brother of John, killed by the sword, and when he saw that this was pleasing to the Jews he proceeded to arrest Peter also” (Acts 12:1-3a).

This James, sometimes called James the Greater, is not to be confused with James the Lesser (May 3) or with the author of the Letter of James and the leader of the Jerusalem community.

Comment:
The way the Gospels treat the apostles is a good reminder of what holiness is all about. There is very little about their virtues as static possessions, entitling them to heavenly reward. Rather, the great emphasis is on the Kingdom, on God’s giving them the power to proclaim the Good News. As far as their personal lives are concerned, there is much about Jesus’ purifying them of narrowness, pettiness, fickleness.

Quote:
“...Christ the Lord, in whom the entire revelation of the most high God is summed up (see 2 Corinthians 1:20; 3:16–4:6), having fulfilled in his own person and promulgated with his own lips the Gospel promised by the prophets, commanded the apostles to preach it to everyone as the source of all saving truth and moral law, communicating God’s gifts to them. This was faithfully done: it was done by the apostles who handed on, by oral preaching, by their example, by their dispositions, what they themselves had received—whether from the lips of Christ, from his way of life and his works, or by coming to know it through the prompting of the Holy Spirit” (Vatican II, Constitution on Divine Revelation, 7).


And the Collect for Saint James from the Book of Common Prayer 2011:
MERCIFUL God, as your holy apostle James left his father and wordly goods without delay to follow the call of your Son Jesus Christ; Grant that, leaving behind all earthly goods and desires, we may always be ready to follow your commands; Through Jesus Christ our Lord, who lives and rules with you and the Holy Spirit, one God, forever and ever. Amen. (Scripture References: Matthew 4.21-22, 19.27-29; Acts 12.1-2; Revelation 22.14)


And from The Divine Hours: Prayers for Summertime by Phyllis Tickle is this Concluding Prayer for today's Vespers Office:

Almighty God, who gave to your servant James boldness to confess the Name of our Savior Jesus Christ before the rulers of this world, and courage to die for this faith: Grant that I may always be ready to give a reason for the hope that is in me, and to suffer gladly for the sake of my Lord Jesus Christ; who lives and reigns with you and the Holy Spirit, one God, forever and ever. Amen.


So I wish you all a blessed remembrance of Saint James, the first martyr among the Twelve Apostles who both lived and died for the sake of Christ our Lord.

With you among the saints, now and always,

Posted by Susanne Barrett at 10:53 PM No comments: Links to this post

"The practices of Lent, resting on the foundation of the meditating day, help us to be both realistic and happy. The two go together in a way that consumerism can never fathom."