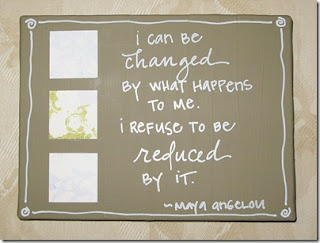 Today while scrolling through Twitter, I followed a link to a blog called Gitzen Girl (from which I stole the above image/quotation) and saw that she had a separate page on her blog explaining her chronic illness. Some of my readers are aware of my physical challenges, but not everyone is, so I thought I would steal her idea (along with her image--I hope she forgives me!) and thereby have a permanent explanation at hand for new readers.

Yesterday I was reminded anew regarding my physical frailties, most of which I attempt to ignore as much as possible so I don't end up being sucked into the abyss of dejection/depression. Yesterday was one of those rushing-everywhere mornings, and I slid, breathless and apologetic, into the pew in Victoria Chapel just as Father Acker finished the Psalms for Morning Prayer from the 1928 Book of Common Prayer. Still a little out of breath, I opened my ESV Bible and read the Old Testament passage from Ruth 4 as Jonathan seated himself next to me. I felt a little lightheaded--but I attributed it to rushing about all morning. We continued through Morning Prayer and then started the liturgy for Holy Communion, and, as always, we stood for the Gospel Reading. Within a few verses, however, the lightheaded feeling turned into the-room-whirling-around-me, and I seated myself, hanging onto my four-pronged cane for support. I couldn't join Jonathan and Father for the Nicene Creed as usual, and Father paused before the homily to ask what was wrong. The dizziness worsened, and during the homily I whispered to J to fetch my mug of tea from the car. After he disappeared out the sliding glass door, Father put his hand on my shoulder and prayed for me before he and J continued through the service while I sat very still, absorbing what I could of God's Word, prayer, and communion while trying to will the walls to stop moving. After the service, I rested on the Ackers' sofa while J had his weekly guitar lesson with Father.

After resting, my head had cleared enough for me to drive down into San Diego to see Dr. Burns my chiropractor, according to our usual Friday schedule, and he corrected a subluxation along the back of my skull that affects balance and the middle ear, along with the usual correction at the top of my spine (C1 and C2). I managed to take J shopping at WalMart and Trader Joe's by using shopping carts for balance and came home to spend the remainder of the day resting and dozing on the sofa. Dizzy spells take so much out of me, and I often need a couple of days to return to my "normal" strength.

I haven't had an incident like yesterday's in a long time, thanks be to God. But it does happen, and it's just plain embarrassing. Even today I'm still lightheaded and not at full strength--or not at my "normal" strength, anyway. So why do these things happen? Read on, and I'll tell you my story.

My Diagnosis
During my five pregnancies, I experienced some odd symptoms that were apparently outside the realm of a "normal" pregnancy: shortness of breath, rapid heart rate, chest pain, dizziness. My OBGYN almost removed Elizabeth via C-section at 36 weeks because my symptoms were so worrisome; I have never seen a doctor panic the way she did when she saw how high my resting heart rate was (I later found out that it was 220). I experienced the same shortness of breath and rapid rate with my next two pregnancies, but it was not as worrisome because I lost the next baby in the second trimester, and our new doctor for my third pregnancy diagnosed me with anxiety and basically ignored my issues. However, my fourth and fifth pregnancies were more serious--with Holter monitors and a referral to a high-risk specialist. After each pregnancy, the symptoms completely disappeared, except for after our last child/fifth pregnancy. The doctors chalked my health issues up to hormonal imbalances and weren't concerned. Neither was I...much.

We moved from the city (San Diego) up to our small mountain town in September of 2001, and I worked very hard packing up our old house and setting up our new one, all the while educating three children at home and nursing a toddler. When my neck began to bother me a few months later, I sought the help of my Sunday School teacher, also a chiropractor: Dr. Burns. After three weeks of treatment, he was concerned. Apparently I wasn't responding well to his adjustments (getting dizzy, pain increasing rather than decreasing), and he advised me to see my primary care physician for an appointment. I did, and in January 2002 I was given a diagnosis: fibromyalgia.

My new primary care physician at Kaiser was something of a specialist in treating this autoimmune condition, and she immediately placed me on a regimen of antidepressants which were supposed to help the pain of fibromyalgia. They didn't work. In fact, I became depressed. With every prescription she gave me, I had the opposite reaction. Muscle relaxants keyed me up so much that I couldn't sleep. Painkillers (including Oxycontin) increased my pain. Antidepressants depressed me. Meanwhile, the pain continued to worsen from vague aching all over my body to severe pain that curled me into a ball and kept me bedridden. I could no longer care for my house or my family, and my guilt mounted. Friends came up the mountain to clean my house and help educate our kids, and I learned to be the one who accepted help after so many years of being the one who offered it--a very trying but very helpful lesson in conquering my pride.

Over the next six months, I changed from an energetic homeschooling mother of four children who cleaned her house, tended her garden, cooked all the family meals, rode her bicycle five miles per day, and played with her kids to being in a wheelchair on a "good day" or curled up on the sofa or in bed on a "bad day." And I was experiencing increasingly more bad days than good ones. My PCP at Kaiser referred me to pain specialists who insisted that I wasn't really in pain because I smiled at them, and then, after 18 months, she gave up on me, referring me to a psychiatrist because "he has access to more drugs." Ugh.

My Treatment
I then visited Dr. Donald Adema, a Christian osteopath, who immediately assured me that my condition was completely physical and that it was definitely not "in my head." Relief coursed through me at his words, and my guilt lessened. He spoke with Dr. Burns, who had been treating me during this time, and, since Dr. Burns' applied kinesiology testing had turned up rheumatoid arthritis as a diagnosis, he decided to place me on that protocol for treating my pain. We started with prednisone and fentanyl pain patches, and for the first time in two years, my pain started to lessen, and I began to gain a little strength. After a couple of years he transitioned me from the fentanyl patches to methadone, weaning me from the prednisone, and that's my current treatment, along with thyroid meds. Dr. Adema's diagnosis is the all-inclusive chronic fatigue syndrome, something he said he was seeing in many homeschooling mothers who were overworking themselves. He also treated me for adrenal failure as well.

After several years of treatment, I can now pedal my stationary bicycle slowly for a few miles every other day. I can now walk with a cane outside the house and use no support in the house. I only need the wheelchair (or my electric scooter, a gift from Keith's aunt when she could no longer use it) for all-day jaunts like the San Diego Zoo, Balboa Park, Disneyland, etc. I can walk almost a quarter mile on a good day. But I need to be very careful as to how I spend my energy. I still have days when taking a shower zaps the vast majority of my energy for the day, but those days are becoming increasingly rare. I can be a semi-normal mother to my kids, but the younger two only know me as a "sick Mom" while the older two remember how I used to be: energetic, fun, focused, always busy. I'm not sure which saddens me more.

So that's where I am. I don't tend to focus much of my blogging on my chronic illness(es), but being ill forms a kind of subtext to all that I do, all that I write, all that I am. I try to distract myself from the pain with writing, reading, teaching, and just keeping my mind busy so that I don't think about how I'm feeling or what I'm missing. Being ill has nudged me to appreciate the views of suffering in more liturgical traditions, has opened my eyes to ancient Christian paths, and has increased and strengthened my faith. It's hard to thank God for chronic illness, but I value where this journey has taken me. However, it's much easier to be thankful when pain is under control (or at least kept at manageable levels), as it is now.

Past Posts on Chronic Illness
Here are some previous posts explaining my chronic illness and my daily battle with my body as I attempt to live a "normal" life.

Saint Teresa of Avila and the Gift of Suffering

More on Health and Faith

A Little Bit About Me

On the journey of God's grace with you,