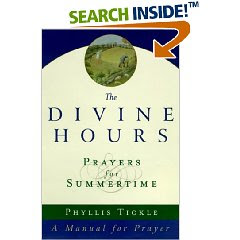 Today, Saturday [originally posted October 3, 2009], is the last day that I will use the above book, The Divine Hours: Prayers for Summertime by Phyllis Tickle until next June. I have come to depend greatly on these three volumes of fixed-hour prayers. I spotted them at Costco several years ago and thumbed through them wistfully, wanting them desperately but unable to afford them. Then my dear Anglican friend Dru gave them to me -- such a beloved gift! Rare has been the day that I have not opened one of these volumes to pray from at least once. Tonight after Compline I will shelve the Summertime volume and wipe the dust from Autumn/Wintertime for use tomorrow morning and over the next four months.

This praying according to set hours feels very foreign to most evangelicals, but I find it soothing and helpful, allowing me to focus clearly on God several times per day in the midst of my busy life. Most of the prayers are simply Scripture, and those that are not are most frequently taken from the Anglican Book of Common Prayer which is mostly Scripture itself.

This morning I discovered an online article about the historicity and value of praying at set times; the article was reprinted from the introductory material in the Summertime volume of Phyllis Tickle's The Divine Hours series. Picking up the volume from my desk, I turned to the beginning of the book and quickly located the information. I would like to quote certain sections that I find most helpful as an evangelical with strong Anglo-catholic leanings. The entire article may be read here: A Brief History of Fixed Hour Prayer, written by Phyllis Tickle.

From the section entitled "The Age of the Apostles":

Fixed-hour prayer, while it is with the Eucharist the oldest surviving form of Christian spirituality, actually had its origins in the Judaism out of which Christianity came.Centuries before the birth of Jesus of Nazareth, the Hebrew psalmist wrote that “Seven times a day do I praise you” (Ps. 119:164). Although scholars do not agree on the hours of early Judaism’s set prayers (they were probably adjusted and readjusted many times), we do know that by the first century a.d. the ritual of daily prayer had assumed two characteristics that would travel down the millennia to us: The prayers had been set or fixed into something very close to their present-day schedule, and they had begun to assume something very close to their present-day intention.
From the same section:


In the cities of the [Roman] Empire, the forum bell rang the beginning of that day at six o’clock each morning (prime or “first” hour); noted the day’s progress by striking again at nine o’clock (terce or third hour); sounded the lunch break at noon (sext or sixth hour); called citizens back to work by striking at three o’clock (none or ninth hour); and closed the day’s markets by sounding again at six o’clock in the afternoon (vespers or evening hour).


Every part of daily life within Roman culture eventually came, to some greater or lesser extent, to be ordered by the ringing of the forum bells, including Jewish prayer and, by natural extension, Christian prayer as well. The first detailed miracle of the apostolic Church, the healing of the lame man on the Temple steps by Sts. Peter and John (Acts 3:1), occurred when and where it did because two devout Jews ... were on their way to ninth-hour (three o’clock) prayers. Not many years later, one of the great defining events of Christianity—St. Peter’s vision of the descending sheet filled with both clean and unclean animals—was to occur at noon on a rooftop because he had gone there to observe the sixth-hour prayers.


The directive Peter received during his noon devotion—i.e., to accept all that God had created as clean—was pivotal because it became the basis of the ecumenism that rapidly thereafter expanded Church fellowship beyond Jewry. Peter was on the roof, however, not by some accident of having been in that spot when the noon bell caught him, but by his own intention. In Joppa and far from Jerusalem and the Temple, Peter had sought out the solitude of his host’s rooftop as a substitute site for keeping the appointed time of prayer.

In the section entitled "From the Apostles to the Early Fathers":

Christians today, wherever they practice the discipline of fixed-hour prayer, frequently find themselves filled with a conscious awareness that they are handing their worship, at its final “Amen,” on to other Christians in the next time zone. Like relay runners passing a lighted torch, those who do the work of fixed-hour prayer do create thereby a continuous cascade of praise before the throne of God. To participate in such a regimen with such an awareness is to pray, as did the Desert Fathers, from within the spiritual community of shared texts as well as within the company of innumerable other Christians, unseen but present, who have preceded one across time or who, in time, will follow one.


In the section called "From St. Benedict to the Middle Ages":


It was, of course, St. Benedict whose ordering of the prayers was to become a kind of master template against which all subsequent observance and structuring of the divine hours was to be tested. It was also Benedict who first said, “Orare est laborare, laborare est orare.” “To pray is to work, to work is to pray.” In so doing he gave form to another of the great, informing concepts of Christian spirituality—the inseparability of spiritual life from physical life. He also formalized the concept of “divine work.”


... For Benedict, as for many before him and almost all after him, fixed-hour prayer was and will always be opus dei, “the work of God,” “the offices.” As for the hours on whose striking the prayers are done, those belong to God and are, as a result, “divine.” And the work is real, as fixed in its understanding of itself as it is in its timing.

So on goes the "divine work" of prayer. I need to learn better to interrupt the work of my hands and mind at these set times of day in order to climb the stairs to my prayer corner and "worship and fall down, and kneel before the Lord our Maker, for he is the Lord our God" and "worship the Lord in the beauty of holiness" (from The Venite (Psalm 95) in the 1928 Book of Common Prayer, The Order for Daily Morning Prayer, page 9).

I am fairly consistent with Morning Prayer. I pray Compline next most often, then Midday/Noon, and don't do so well with Vespers because it's a busy time of day in our home as we finish the day's schooling while Keith makes dinner. My desire is for these times of prayer to become a routine part of my life so that, like Peter, I can withdraw myself to a quiet place and "worship the Lord in the beauty of holiness" throughout the day. The fixed-hour prayers in The Divine Hours are short; in reality, they take a mere five minutes, and only ten if I add intercessory prayer as I often do. And the brevity of these Scriptural prayers becomes an opportunity to practice Lectio Divina as well.

But it's an interruption. It takes a willingness to leave whatever I may be doing at that time and go upstairs for those 5-10 minutes. Jennifer at Conversion Diary writes about the same difficulty in putting aside the work she is engrossed in to go pray right here.

So I hope indeed to focus more on praying the Divine Hours at the set times indicated. It's an excellent way to truly place God as the first priority in my daily life, one that I pray that I will indeed apply to my days here at home as Prayers for Summertime close and I open Autumn/Wintertime.