THE BOOK OF COMMON PRAYER 2011

Last spring Father Keith Acker of Alpine Anglican Church of the Blessed Trinity, a small fellowship of the Reformed Episcopal Church in the hamlet of Alpine, thirty miles east of San Diego, asked if I could help edit a project.

I had no idea of the journey ahead of me.

You see, conservative Anglicans are between a rock and a hard place when it comes to the Book of Common Prayer, the basis of Anglican liturgy and worship. If one wants to remain true to Anglican and biblical doctrine, then one must use the antiquated 1928 Book of Common Prayer. A beautiful book, the 1928 BCP uses the Great Bible of 1539 as its Scriptural basis. The Great Bible is beautiful, but it predates the King James by seventy years and thus is not extremely accessible to today’s modern Christian (unless they’re a medieval fan like myself). But the 1979 Book of Common Prayer, although accessible, contains significant changes in doctrine; basically, it’s far too watered down for most conservative Anglicans and Bible-centered Christians.

So there lies the dilemma. Does one side with doctrine over accessibility? Or vice-versa?

This new 2011 BCP solves this conundrum. Using the English Standard Version Bible published in 2001 as its Scriptural core and retaining the historical, traditional, and biblical basis of the Anglican and catholic (universal) Church, it’s both doctrinally sound and linguistically accessible.

Basically, as the title page reads:

“This Book is for trial use by the Reformed Episcopal Church and the Anglican Church in North America for liturgical review. This Trial version has not been authorized, at present, for general use except as permitted by the ordinary of each diocese.” 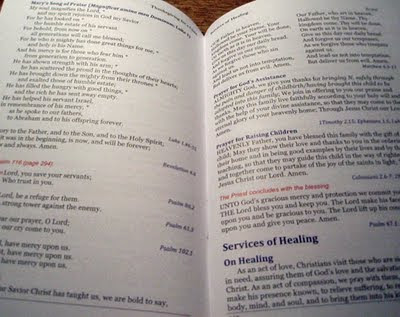 Our prayer is that the Reformed Episcopal Church and Anglican Church of North America will adopt this BCP 2011 for use in their churches in the US and Canada. Retaining historical and doctrinal accuracy, our prayer for this edition of the Book of Common Prayer 2011 is that it will introduce many people to the Biblical Anglican Church, allowing them to experience the prayer book for the first time.

Father Acker has done an incredible job of pulling together the best of all the prayer books, including prayers from the Early Church, then revising them into modern American English usage while retaining the power and the poetry of the original. He also translated hymns and prayers from Latin, picking up a beautiful rhyme and meter; they read beautifully. I just came along as an editor, pointing out awkward phrasings and unifying punctuation.

Father Acker, his lovely wife Alice, and I have spent many a Wednesday afternoon at our homeschooling table, reading the BCP aloud to catch anything amiss, discussing what was unclear, rewording sentences, and clarifying the grammar. There were some days in which he had to patiently explain the theology and/or doctrine behind a certain prayer or sentence, and we moved very slowly through the Collects (prayers for each week of the year, prayed “collectively” by God’s people). On other days, we breezed through fifty-some pages in one sitting. Then during the week he e-mailed me changes, and I e-mailed him my suggestions for improvement. Sometimes we went back and forth several times, getting each prayer down, just so.

As I am not a member of the Anglican Church, much of the theology and content was new to me, and my ignorance and many questions became quite helpful in fleshing out explanations of aspects of the Anglican tradition and practice. I have been attending weekday prayer and Communion services with Fr. Acker since 2004, but my church membership resides within the Evangelical Free Church.

I started praying with the Book of Common Prayer over ten years ago, using a 1662 edition illustrated with illuminated manuscripts which I purchased more for the illustrations than for the content when I worked at the HBJ Bookstore in downtown San Diego. Then, after moving from the city to the mountains east of San Diego, I discovered a nearby Anglican Church and was introduced to the 1979 Book of Common Prayer, and then to the 1928 BCP which I have used for the last six years exclusively until this new 2011 edition. As a scholar of medieval literature, I adore the beauty of language in the 1928 BCP, but its main obstacle was its inaccessibility to a modern audience that was not made up of medievalists like myself.

Here is the link to the website for further information and for placing orders:

To close, here is the Third Collect from Morning Prayer: A Prayer for God’s Help This Day:

Heavenly Father, Almighty and eternal God; We thank you for bringing us safely to the beginning of this new day; defend us, your servants, with your mighty power; So that during this day we may not fall into sin, nor be caught up in any kind of danger; And so direct and guide us, so that we may do those things that are right in your eyes; Through Jesus Christ our Lord. Amen.

Praying God's Word with you,