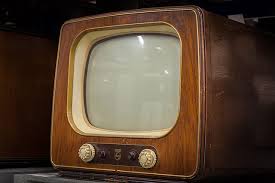 Yes, with my imagination and love for well-developed characters, I easily become addicted to television series. Films are nice, but watching characters develop week after week for up to 24 episodes per season provides so much more insight into their loves and hates, their quirks and humor, than a mere two hour movie. 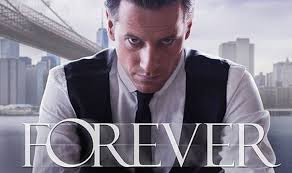 I remain heartbroken over the cancellation of my favorite television series of last year: Forever starred Ioan Gruffudd of Titanic, Fantastic Four, and Horatio Hornblower fame as Dr. Henry Morgan who, through a miraculous turn of fate, is immortal and has been alive for about two hundred years. Working in New York City as a Medical Examiner, he is teamed with Detective Jo Martinez (Alana De La Garza) as they solve crime. Only Henry's adopted son, played by Judd Hirsch, knows his secret. I adore the mysteries each week as well as the growing romance between Henry and Jo; the quirkiness of the characters also delighted me. The flashbacks into Henry's past were fascinating, especially those of his wife, Abigail, who had known his secret and had helped him in rescuing Abraham as an infant from Auschwitz. It was a truly riveting hour of television each week, and I practically went into mourning when I heard the cancellation news.

So crime shows and mysteries are my thing. My other favorite shows, Castle, Rizzoli & Isles, NCIS (all three), CSI, Hawaii 5-0, Criminal Minds, Elementary, Sherlock, Bones, the also-cancelled Body of Proof with Dana Delaney--all have that mixture of crime solving combined with thoughtful and detailed character study. My other top favorite show, Sleepy Hollow, combines mystery with some crime solving as Ichabod Crane and Lieutenant Abigail Mills not only solve crimes but also fight true evil as they attempt to halt the coming Armageddon. The only one of my favorite shows that doesn't have the crime/mystery component is Downton Abbey which combines character study with an amazing time in Great Britain's history, so I'm good with it, and So You Think You Can Dance is in its own category, of course. 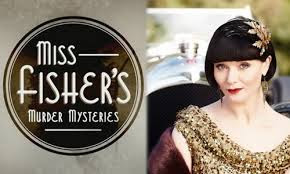 So when browsing Netflix, I stumbled across the Australian show Miss Fisher's Murder Mysteries (Series 3 is now playing Saturday nights on PBS), and I was hooked. Set in the late 1920's in Melbourne, Miss Phryne (pronounced "FRY-knee") Fisher (Essie Davis) is a wealthy "modern woman" who sets up as a lady detective, at first to the annoyance of Detective Inspector Jack Robinson (Nathan Page). Later Phryne and Jack end up working together, with the assistance of Miss Fisher's companion Dot (Ashleigh Cummings) and Jack's right-hand man, Constable Hugh Collins (Hugo Johnstone-Burt). 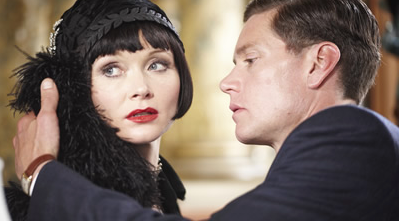 Miss Fisher seems to pick up strays wherever she goes, from some rough-and-tumble cab drivers and her butler with WWI spy experience, aptly named Mr. Butler, to a teen runaway named Jane. Wielding a pearl-handled golden handgun with panache and accuracy, Phryne Fisher becomes deeply embroiled in various mysterious and dangerous cases with Jack while feelings slowly begin to build between them. Series 3, which is only 8 episodes (the other series are 12 or 13 episodes each), marks the end of the series...the final episode of which I watched last night on Netflix. I was sorry to see the series end, but it was an extremely satisfying ride with everything tied up quite neatly and romantically.

The costumes are simply amazing--and the characters are quirky and always doing the unexpected. The attention to detail in the sets and the lovely outdoor scenes in Australia are beyond gorgeous. I've added quite a few of Phryne's best costumes and images of the other characters to my Pinterest Board "I'm a TV Junkie" if you're interested. 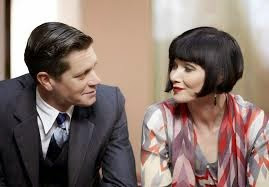 Unfortunately, as I peruse the new shows for this fall, I don't see anything that particular grabs me. I'll probably just rely on my old favorites, including the final CSI two-hour special playing Sunday night (9/27) with the return of Grissom, Catherine, and the rest of the gang. Plus, the final season of Downton Abbey will be starting here in the US on January 3, 2016; I'll especially hate to bid the Crawley family, both upstairs and down, a final farewell.

And I've been promising myself to start watching Doctor Who. I've seen a few and quite like it, but no one else in the family does, so I'll be watching by myself, I guess. Sci-fi isn't really my thing, but I've heard so much about this series....

What are some of your favorite TV shows, past and present?

Getting out the popcorn,

How to Make a Difference in the World...Right Now

As Christians living and working in the world today, simply hundreds of online devotionals are available at a mere click. It is all too easy to allow these devotionals to clutter our inbox each day.

I have narrowed my online devotionals to only two: The Daily Reflection from The High Calling, and Saint of the Day from American Catholic.

And today's Daily Reflection was thought-provoking enough that I want to share it here. I've copied it in its entirety from The High Calling site.

Wishing you a blessed Sunday,

Posted by Susanne Barrett at 11:10 PM No comments: Links to this post