This season of Advent has been amazing. On the Sunday before Advent began, I approached our associate pastor and asked if we could celebrate Advent this year. We were already looking forward to Pastor Joe Murrell's return to Pine Valley Community Church after a four-year absence following ten years of pastoring here previously. Pastor Joe and his lovely wife, Jenny, were packing their home in Paradise, California in preparation to return to Pine Valley when the Camp Fire swept through Paradise, destroying their home along with nearly 16,000 additional residences, businesses, and other structures. So Pastor Jeff thought that celebrating Advent, which Pastor Joe had done in his time previously at PVCC, was a great idea. We worked out the details, and it's been wonderful celebrating Advent as a church together, especially during this time of transition. 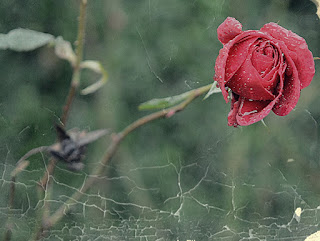 Since Pastor Joe returned, he has preached on "Advent and Joy" and, today, on "Advent and Love." So Advent at PVCC this year has not merely been about families coming up to light the Advent candles and read the Scriptures covering the four themes of Advent: Hope, Peace, Joy, and Love. Advent has permeated the entire service, from the sermons to the prayers to the worship songs. And this morning four members of our worship team sang a lovely arrangement of the German Advent carol "Es ist ein Rose entsprungen" which was first published in 1599 and was translated into English by Theodore Baker in the 1890s and renamed "Lo, How a Rose E'er Blooming." The poetry of this hymn is absolutely incredible, and hearing it sung in four parts acapella was even more impressive. Here are the English lyrics:

What a way to celebrate the fourth and final Sunday of Advent with Christmastide peeking around the corner!!

And here is the Collect for the Fourth Sunday in Advent from the Book of Common Prayer 2011:

O LORD, raise up your power, we pray, and with great might come among us; And, as our sins and wicked ways greatly hinder us in running the race that is set before us, let your abundant grace and mercy come quickly to help and deliver us; Through Jesus Christ our Lord, who with you and the Holy Spirit, belongs all honor and glory, now and always. Amen. (References: Isaiah 51.9; Hebrews 12.1; Romans 3.24-26)

Wishing you all a blessed Advent and a joyous Christmastide!!

Posted by Susanne Barrett at 1:35 AM No comments: Links to this post

Although today marks the Third Sunday in Advent, which is known as Gaudete Sunday, when we light the rose-colored candle, I wanted to share a blog post I wrote for the Pine Valley Community Church blog as Pastor Jeff decided to celebrate Advent this year. Advent has been celebrated at PVCC in the past, so when I asked Jeff about continuing the tradition, he was all for it.

Our kind church family at Lake Murray Community Church allowed us to "borrow back" the Advent wreath Keith made about 15 years ago when Pastor Rollo was the worship pastor. So we have resurrected the wreath and the tradition now at PVCC, and I'm so thrilled!


Ever since we moved to Pine Valley in 2001, our family has celebrated the season of Advent. Keith made a simple wooden Advent wreath for our kitchen table, and every Advent season we have darkened the room, lit the candles after dinner, and read and prayed aloud together from one of the many Advent devotionals we’ve used as the kids grew up, focusing our minds and hearts on the coming of Christ in His Incarnation and looking forward to His Second Coming. 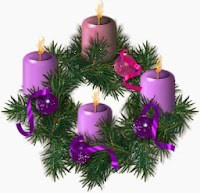 Advent also marks the beginning of the Christian Year for most churches in the Western tradition. The season of Advent is richly symbolic. The light of the candles reminds us that Jesus is “the light of the world” and that we are also called to “walk in the light, as He is in the light.” The purple of the candles symbolizes the royalty of Christ, the Almighty who “made Himself nothing, taking the very nature of a servant, being made in human likeness.” The rose candle, lit on the third Sunday, reminds us that hope and peace are near, available only through God. Lit on Christmas Day, the white candle which is called the Christ candle, recalls Christ’s holiness, purity: He who was without sin who died for the sins of all. The central location of the Christ Candle reminds us that the incarnation is the heart of the season, giving light to the world. The greenery, symbolizing abundant life, surrounds a circular wreath: never-ending, eternal life. The red of the holly berries reminds us of His blood to be shed on the cross for us.


The origins of the Advent wreath are found in the folk practices of the pre-Christian Germanic peoples who, during the cold December darkness of Eastern Europe, gathered wreaths of evergreen and lighted fires as signs of hope in a coming spring and renewed light. Christians kept these popular traditions alive, and by the 16th century, Catholics and Protestants throughout Germany used these symbols to celebrate their Advent hope in Christ, the everlasting Light. From Germany, the use of the Advent wreath spread to other parts of the Christian world.

The purple theme of Advent is also the color symbolizing suffering which is used during Lent and Holy Week and points to an important connection between Jesus’ birth and death: The Nativity--the Incarnation--cannot be separated from the Crucifixion and Resurrection. The purpose of Jesus’ coming into the world, of the "Word made flesh" and dwelling among us, is not only to reveal God and His grace to the world through Jesus’ life and teaching, but also through His suffering, death, and resurrection.

The focus of the entire season is the celebration of the birth of Jesus the Christ in His First Advent, and the anticipation of the return of Christ the King in His Second Advent. Thus, Advent is far more than simply marking a 2,000-year-old event in history; it is celebrating a truth about God, the revelation of God in Christ whereby all of creation might be reconciled to God. This is a process in which we now participate, and the consummation of which we anticipate. Scripture readings for Advent reflect this emphasis on the Second Advent, including themes of accountability for faithfulness at His coming, judgment of sin, and the hope of eternal life in this double-focus on past and future.

Advent also symbolizes the spiritual journey of individuals and a congregation as they affirm that Christ has come, that He is present in the world today, and that He will come again in power and glory. That acknowledgment provides a basis for Kingdom ethics, for holy living arising from a profound sense that we live "between the times" and are called to be faithful stewards of what is entrusted to us as God’s people. So, as the church celebrates God’s in-breaking into history in the Incarnation and anticipates a future consummation to that history for which "all creation is groaning awaiting its redemption," it also confesses its own responsibility as a people commissioned to "love the Lord your God with all your heart" and to "love your neighbor as yourself." The primary focus of Advent is Jesus the Christ, the Son of the Living God, as we wait together to celebrate His birth, death, glorious resurrection, and imminent return.

Here is a prayer we’ve prayed together each Sunday in Advent:
O God, rejoicing, we remember the promise of your Son.
As the light from the candles fills this room,
may the blessing of Christ come upon us,
brightening our way and guiding us by His Truth.
May Christ our Savior bring light and life into the darkness of our world,
and to us as we wait for His coming. Amen.

Wishing you a holy and joyous Advent season,

Posted by Susanne Barrett at 11:39 PM No comments: Links to this post