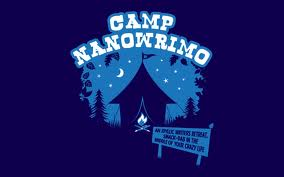 I will be teaching a Fan Fiction class with Brave Writer during the month of July, but the class is a piece of cake compared to the other classes I taught during the school year; my last class topped 1100 posts in four weeks, nearly all of which I responded to point by point.

But July also marks the return of Camp NaNoWriMo--a more relaxed version of November's National Novel Writing Month (NaNoWriMo). Instead of the 50,000 words-or-bust scenario of writing a new novel as we do each November for NaNoWriMo, in Camp NaNoWriMo we set our own goals and write in different genres, if desired.

I plan to work on two novels alternately during Camp NaNoWriMo with an overall goal of 30,000 words--one thousand words per day, skipping the July 4th holiday. One novel will be a sequel to my first novel, a Twilight fan fiction, and the second will be a Jane Austen Fan Fiction (JAFF), a continuation of Pride and Prejudice (currently untitled), starting with Bingley and Darcy's return to Netherfield after the Lydia/Wickham fiasco.

I have spent nearly a year absorbing JAFF (as can be easily seen by the list of books I've read this year as posted in the sidebar of this blog), especially from the wonderful site Austen Variations which features the work of some incredibly-talented writers of variations and continuations of Austen's novels. I've become a devoted fan of their work, especially that of Abigail Reynolds, Monica Fairview, Mary Lydon Simonsen, Kara Louise, Jack Caldwell, Jane Odiwe, and many others. I've been able to borrow many of their novels through the state-wide California public library system called "LINK +," with the vast majority of the books coming from San Francisco and other Northern California public libraries. I've also invested in a few Kindle books by these authors when their books are not available through the library, plus I've been reading additional JAFF on FanFiction.net, especially by Astonishment, AnotherSentimentalFool, SophieTurner1805, Shaelelina, and DarcyFan1. So I am really excited about starting to write my own JAFF!

If anyone else is doing Camp NaNoWriMo, please feel free to "friend" me under the user name SusanneB, and we can encourage each other along the way. The beginning of my Jane Austen Fan Fiction novel can be read from the Writing Project Info page.

And, for my Quotation of the Week:

"Your intuition knows what to write, so get out of the way."~Ray Bradbury

Posted by Susanne Barrett at 2:41 PM No comments: Links to this post