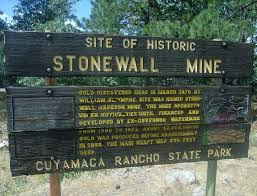 We kids would take turns going out on early morning or late afternoon trail rides with one of our parents, and the ones left behind would often hike up Stonewall Peak, a local mountain accessible from basecamp at the Paso Picacho Campground; it was two miles up the peak topped with gargantuan boulders and two miles back down, not counting the two-mile hike to the base. Or we might explore the remains of the local goldmine, Stonewall Mine, from which two million dollars of gold was unearthed in the 1880s. Now surrounded by chain-link fencing, we’d walk the perimeter, trying to peek down the huge hole that marked the main mineshaft. A small cabin nearby hosted photos enlarged to poster-size recounting the history of the most prosperous goldmine in our local mountains.

Hot afternoons were spent napping under the pines, reading quietly or playing not-so-quiet card and board games. We usually played games after dinner, too, gathered around our Coleman lantern on the red-and-white plastic tablecloth, the color worn away in places from frequent scrubbings after dinners of spaghetti or barbecued burgers or our favorite: grilled Spam with baked beans, fried potatoes and onions, and brown bread sliced from the can which we always enjoyed on our final night (after the fresh meat was long gone) before packing up and leaving for home the next morning.

Sometimes after dinner, we’d scrape the plates and leave them to soak in the dishpan while we kids leaped into the back of the ancient, bent-backed ranger's 1950’s Ford truck, and he drove us along backroads inaccessible to all but the park staff, motioning us kids to be quiet as we kept an eagle-eye out for deer and bobcats coming out to feed at dusk. One night, we counted over twenty-five deer in half an hour. The ranger, Vern, looked as if he were a century old, with gnarled hands, a thin, wrinkled face, and rheumy eyes. Several nights during our trips, he visited our campsite after dinner and told us stories about his cowboy days in the ‘20s and '30s while we munched Jiffy-Pop popcorn or gooey s’mores. Some of Vern’s stories must have been tall tales, but it was hard to tell when he was joshin' us; as we grew older, the twinkle in his dimming eyes usually clued us in.

In the summer after we reached our teens, Dad rented a rowboat for my brother and me, and the two of us spent a whole day floating on calm Lake Cuyamaca. Tom fished while I read from a stack of favorite books (usually featuring Louisa May Alcott, Nancy Drew, or Trixie Belden), and we met the rest of the family for a picnic on the island in the middle of the lake, hiking up the hill to the very top of the island where the picnic tables (and a small one-holer “toilet”) were permanently installed. Tom never caught much except for a nasty sunburn and rather sore muscles from rowing us about, and sometimes I came back with a headache from the sun glaring off the white pages of my books for more than eight hours, but the peace and quiet of the lake on a weekday were magical.

Another tradition of our camping trip was taking a day to drive into Julian, a former mining town and now a tourist area. We bought candy and snacks at the Cider Mill, browsed through some shops, and stopped at the old-fashioned drugstore for strawberry sodas at the marble soda fountain. Skipping the ubiquitous apple pies for which the town was famous, we replenished our ice chests at the corner grocery store and perhaps picked up more fresh meat before we drove back down the winding roads to Los Caballos, hoping no one would get sick in the car after all the sweets we had enjoyed.

We spent up to two weeks camping nearly every summer at Los Caballos, as our mother had before us starting in the 1950s, and as our kids did for part of their childhood; our parents loved teaching their grandkids the joys of camping. When we were younger, our grandparents, aunt, and uncle often came up for a day; my grandfather, a former member of the Escondido Police Posse, often took a short ride with my aunt who was as horse-crazy as my mother and sister. When we were older, we often brought along Scott, our neighbor from across the street, for a few days, and he insisted on climbing Stonewall Peak daily during his stay. My parents’ best friends often came up for a couple of days with us, too—although they actually slept inside their tents (perish the thought!) and thus missed most of the raccoon fights in the creek bed. We loved every moment of our trips to Cuyamaca Rancho State Park.

Unfortunately, Los Caballos burned in the 2003 Cedar Fire which devastated so much of San Diego County, and because of Native American artifacts around the camp, it was never rebuilt. Occasionally, I still drive up to Julian, always stopping to pause at the metal gates blocking access to our beloved campground, the metal horse stalls still visible through the devastation wreaked by the fire sixteen years ago.


Every time I drive (or am driven) down the mountain on Interstate 8 into San Diego, I automatically turn my head to the right at a certain point before the Highway 79 exit where the nearby mountains part perfectly, revealing the distinctive rocky southern face of Stonewall Peak. Every time, memories of hiking that mountain with my dearest family and friends come to mind.

Thanks for strolling down memory lane with me!

Posted by Susanne Barrett at 11:58 PM No comments: Links to this post 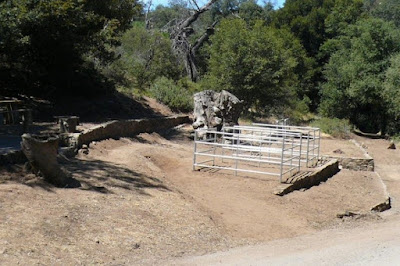 Part One of Two


Groaning at the loud, domestic arguments of the Stellar Jays in the trees above us, I woke to the scent of bacon on a brisk summer morning. Deciding the brave the cold, I stumbled out of the tangle of my sleeping bag atop a canvas cot, one of five lined up in a row beneath the magnificent oak tree in Campsite #16 of Los Caballos Horse Camp. Pulling on shoes without socks and then a jacket over my pajamas, I made my way to the tent to dress in warm clothing on this 40-degree morning.

After hiking to the one bathroom for the sixteen campsites with my sister, we returned to toss flakes of hay to Brownie and Sweetpea whose metal-pipe stalls were within the half-circle driveway of our campsite. We filled their water buckets, and once the horses were munching away on their breakfast, we could enjoy ours. We folded our legs and slipped sideways to sit at the sturdy wooden picnic table that was the centerpiece of the site which was backed to a dry creek bed, making it more private than the other campsites. Mom placed plates filled with scrambled eggs, bacon, toast, and fried potatoes and onions before us, and we dug in, still shivering, while Dad tossed kindling and logs into the cement ring a few feet away, rebuilding the fire from the still-glowing coals of last night’s blaze.

After breakfast, my brother and I helped with washing the dishes, filling the huge aluminum pot from the nearest faucet, then carrying it back carefully between us, each of us holding a handle. Mom took the heavy pot from us and set it on the battered Coleman stove to heat the water for washing the dishes while my sister and Dad saddled Brownie, our ancient bay mustang gelding with a greying nose, and Sweetpea, our buckskin quarter horse mare, a former barrel-racer. Both were excellent, if somewhat plodding, trail horses, and getting an early start was vital before the temperatures soared into the nineties later in the day.

The three of us started washing the dishes as Dad and Tracey moseyed out of the site and crossed the paved asphalt road, picking up the trail around the perimeter of Lake Cuyamaca. Mom, Tom, and I planned to hike over later to meet them with a picnic lunch on Fletcher Island in the center of the lake. Meanwhile, the three of us might hike down to Paso Picacho, a large non-equine campground a couple of miles southwest of Los Caballos, or we might settle into beach chairs around the fire with books or play another game of Yahtzee! or Gin Rummy at the picnic table.

I miss camping. My husband is not a camper despite his many camping trips as a child. We also grew up camping every summer, often trailering our horses up to the local mountains a mere forty miles from home to a splendid and quiet horse camp in the Cuyamaca Mountains northeast of our hometown of El Cajon, California. It was always a challenge to drive those forty miles, which felt like a hundred given our excitement and our concerns that our ancient International Travel-All, christened “Tizzie,” which pulled our equally-ancient double-horse trailer (both painted a cheap Earl Scheib chocolate-brown to match), might overheat on the journey during which we climbed nearly 4,000 feet in elevation.

Dad drove Tizzie, which, with two of the three bench seats removed, sported two bales of hay and a huge bucket of oats plus empty water buckets for the horses in the back, while Mom drove her sporty 1971 green Plymouth Duster which hauled the small aluminum-lidded trailer that contained all camping our gear, food, and clothing. We three kids were distributed among the vehicles: two in the back seat of the Duster, a pile of pillows between us, and one in the front seat of the Travel-All beside Dad, all of us keeping our eyes peeled for potential steam coming from either vehicle despite our early departure.

We tent-camped, but the tent was mostly used for changing and storing our clothes; we slept outside at night since the only rainstorms that attempted to drench us occurred in the afternoons. And if we camped in mid-July, as we usually did, we'd miss even those storms. Camping in August, however, was a different and much wetter story.

Posted by Susanne Barrett at 11:11 PM No comments: Links to this post