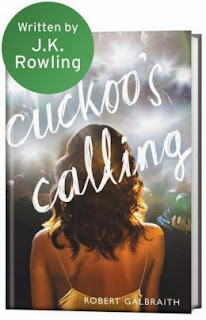 When we resume homeschooling and I start back with my new Brave Writer class (The Groovy Grammar Family Workshop starts Monday!!) and my Expository Essay course at Class Day, I won't have so much time for blogging.

Plus, I'm avoiding working on the next chapter of my novel because I went off on a weird tangent during NaNoWriMo and I'm not sure what to do with it....

So while my novel simmers on the back burner of my brain and while I rest up in preparation for starting back to school, I've been reading.

Or trying to read.

Nearly two weeks ago I grabbed The Cuckoo's Calling by Robert Galbraith (who is really JK Rowling!! -- 2013) from the library shelves. It's been staring at me for weeks while I graded essays in our teensy town library, so with vacation looming, I thought I'd give it a whirl.

I made it about a third of the way through before finally giving up this morning. 136 pages is all I could do. So I'm afraid that's it.

As much as I love mystery novels, this one just isn't grabbing me. Perhaps it's just my lazy mindset during vacation, but the characters just aren't making me care about them, and the mystery seems to be moving too slowly and ponderously. I know it's JK Rowling, but...sigh.

I'm rather disappointed. But perhaps just now (during vacation when I want something mindless and fun--like watching all 100+ Lizzie Bennet Diary episodes on YouTube--but that's another post!) isn't the time for me to be reading this particular book.

And then somehow all of my long-delayed library requests came in at the same time, and I have a teetering stack of library books waiting for me....

I've been waiting for Thrones and Dominations by Jill Paton Walsh and Dorothy Sayers (1998) in which Walsh completes one of Sayers' unfinished Lord Peter Wimsey mysteries--since July. (I later found out that the only copy was stolen, so I had to get it through the Circuit, the network of libraries here in SD County, thus the delay.) I read the second Walsh/Sayers Wimsey mystery which was set during World War II, and I loved it. So I'm counting on this one being just as good, if not better. Walsh does a lovely job of capturing Sayers' beloved and whimsical characters while keeping Sayers' style and suspense flowing nicely.

I also have a third book in the series, only this one is a continuation of Lord Peter and Harriet Vane not from Sayers' drafts or notes: The Attenbury Emeralds by Jill Paton Walsh (2010). This one came quickly through the county library request system, so I can get it again if I don't have time to read it now.

In addition, I have Diane Setterfield's Bellman and Black (2013) which I just noticed is overdue. I adored her premiere novel, The Thirteenth Tale, so I have high hopes for this book...although I will most likely have to return and re-order it when I have more time to read it. Sigh....

With all The Hobbit craze lately (our four kids adored the second installment of the film series!), I happened to run across a newly-published albeit unfinished book by JRR Tolkien, The Fall of Arthur (1930's/2013). While I'm not much of a fan of Tolkien's fantasy books, as a student of medieval literature I love his focus on literature of this time period, and thus the poem and the essays included, edited by Christopher Tolkien, are of great interest to me. I'll let you know what I think when I get that far.

And with the fourth season of Downton Abbey starting here in the States on Sunday evening, I couldn't resist checking out The World of Downton Abbey by Jessica Fellowes (2011), daughter of Downton Abbey creator and writer Julian Fellowes who also wrote the foreword of the book. The book is full of illustrations regarding costuming, sets, Highclere Castle where the series is filmed, and quotes from the actors and others about the compelling characters. The book only covers the first two seasons, but it looks absolutely fascinating.

So these are the books I have lined up to read right now. Some may have to be returned to the library and reordered at a later date while I hope to read others in the meantime. I'll let you know my thoughts as I read.

Posted by Susanne Barrett at 2:04 PM