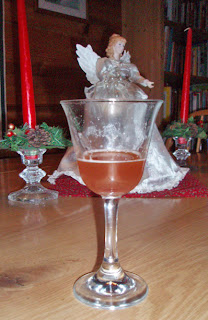 Last night, E, T, Keith, and I managed to make it to midnight in order to "ring in" (with the brass bell on the front porch) the New Year. While Keith plied us with onion dip, chips, BBQ wings, and onion rings, the kids and I spent the evening playing board games: CLUE which T won (Mrs. White in the billiard room with the lead pipe) and Pirates of the Caribbean LIFE which I won (as Will Turner, a Landlubber). It was 11:30 when this game finished, and we sent a very sleepy and somewhat cranky B and J off to bed. E and I broke out a card game, SET, while T played X-Box until five minutes until midnight. We watched the "ball" in Times Square drop as we counted down the seconds left in 2007 with Dick Clark, and then we toasted each other with Martinelli's and I jumped out onto the porch to ring the brass bell. Then I prayed blessings for the New Year over the two older kids as I had over the younger boys when they headed to bed.

Sigh. A year gone, just like that. I didn't believe my elders when they told me that time flies by faster as one grows older, but I am beginning to believe them. It seemed like just a few months ago that I was nursing babies and chasing toddlers, and how I have managed to now have a high school girl and a "baby" who just turned eight years old is a mystery to me. The gray in Keith's hair (and the white strands in mine) seem to have appeared overnight, and I shake my head is disbelief as T approaches my height. What happened to my babies????

This morning we slept in quite a bit, and I started reading through the Bible with the Bible Book Club (look under "Blogs of Interest" in sidebar). Just after noon we drove up the mountain to my parents' cabin atop Mount Laguna. My parents, my brother and his family, and my mom's cousin and his wife joined us for chili, cornbread, salad, and cheesecake to usher in the New Year. I avoided the sauerkraut which is supposed to bring good luck to us, according to our Germanic family tradition. Not that I don't need some luck, but I just can't stand kraut. Ugh!

After eating, the kids, Mom, Tina, and I gathered around the coffee table to play APPLES TO APPLES, a wonderfully fun game of nouns and adjectives. M won, with T in second place, and Tina, Mom, and I tied for third place. The guys looked at photos on my dad's computer and cleaned up the kitchen while we played. Tom's family and Mom's cousins went home a little before we did, and we drove back down the mountain around 6:30. Mom and Dad will take down the Christmas decorations and clean up the cabin before battening down the hatches and turning off heat and water until they go up to the cabin again -- such a lovely little place. It's amazing how 600 square feet can bring such joy and warmth to a family....

So tonight we're home. The boys are in bed, and E and I are going to cosy up on the sofa to watch TV together with Dash. Our doggie is a bit worn out from having his brother (same parents but different litter) stay with us between Christmas and New Year's. I don't think those two dogs stopped playing much for the five days they were together.

It seems as though everyone has resolutions for the New Year, and I am no different. However, I have decided to take on one goal a month rather than a pile of resolutions that I will give up upon by mid-January. So for this month I resolve to get up a little earlier each morning in order to do stretches and have my private prayer time with the Lord, during which time I'll pray the Morning Office and read through and meditate on the chapter(s) for reading through the Bible in Three Years (see Bible Book Club under "Blogs of Interest"). Once this habit is fully formed, I'll tackle another. So that's my plan to enact change for the New Year, one I pray will work!

So we wish you a very Happy and Blessed New Year (and Merry 8th Day of Christmas!) to you and yours.
Posted by Susanne Barrett at 8:28 PM