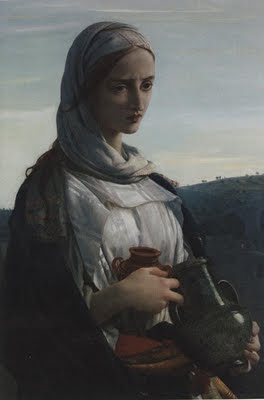 Saint Mary the Magdalene is, after Christ's mother Mary, the most important woman in the Bible. She was a great supporter of Jesus' ministry, thankful for the freedom she experienced from demonic possession as a result of Christ's power.

This morning, July 22, I attended the usual Friday morning Anglican services alone; usually I have at least one, if not more, of the kids with me. But it was a quiet day--no bells rung, a day of contemplation, of prayer, of reading and praying God's Word, of celebrating the Blessed Sacrament of Holy Communion. And it was a day to remember this Biblical saint, Mary of Magdala.

The Book of Common Prayer 2011 contains a Collect to celebrate this day in the life of the Church:

Almighty God, whose only Son restored your servant Mary Magdalene to health of mind and body, and made her a witness to his resurrection; By your grace may we mercifully be healed of all our weaknesses and serve you in the power of his risen life; Who with you and the Holy Spirit, lives and rules, one God, forever and ever. Amen.

The prayer regarding Mary Magdalene from Divine Hours: Prayers for Summertime reads:

Almighty God, you have surrounded me with a great cloud of witnesses: Grant that I, encouraged by the good example of your servant Mary Magdalene, may persevere in running the race that is set before me, until at last I may with her attain to your eternal joy; through Jesus Christ, the pioneer and perfecter of our faith, who lives and reigns with you and the Holy Spirit, one God, for ever and ever. Amen.

I always think of Mary as the woman who first saw our resurrected Lord outside the tomb on that very special Sunday morning. With what sorrow did she approach the tomb, and with what joy did she depart from it to tell the Eleven what had happened! Mary must have been so very well-beloved of our Lord to be given the first glimpse of Him after the Resurrection. And before she recognizes him, she questions him about the missing body, believing Him to be the gardener, until He said simply, "Mary."

At that moment she realized several things: 1) Jesus was indeed alive; 2) Jesus had fulfilled His promises of rising again the third day; 3) God does miracles--He is indeed a God of grace and might, with power over Death itself.

Here is what the Saint-A-Day e-mail from americancatholic.org stated today regarding Mary Magdalene and the misinformation about her that I heard even from my pastor on Sunday:

Except for the mother of Jesus, few women are more honored in the Bible than Mary Magdalene. Yet she could well be the patron of the slandered, since there has been a persistent legend in the Church that she is the unnamed sinful woman who anointed the feet of Jesus in Luke 7:36-50.

Most Scripture scholars today point out that there is no scriptural basis for confusing the two women. Mary Magdalene, that is, “of Magdala,” was the one from whom Christ cast out “seven demons” (Luke 8:2)—an indication, at the worst, of extreme demonic possession or, possibly, severe illness.

Father W.J. Harrington, O.P., writing in the New Catholic Commentary, says that “seven demons” “does not mean that Mary had lived an immoral life—a conclusion reached only by means of a mistaken identification with the anonymous woman of Luke 7:36.” Father Edward Mally, S.J., writing in the Jerome Biblical Commentary, agrees that she “is not...the same as the sinner of Luke 7:37, despite the later Western romantic tradition about her.”

Mary Magdalene was one of the many “who were assisting them [Jesus and the Twelve] out of their means.” She was one of those who stood by the cross of Jesus with his mother. And, of all the “official” witnesses that might have been chosen for the first awareness of the Resurrection, she was the one to whom that privilege was given.

Mary Magdalene is also one of the greatesy subjects of painters through the ages. If you would like to see an assortment, search "Mary Magdalene" in Google Images and see all of the amazing paintings that come up. The painting above is by John Rogers Herbert and is dated 1859. I debated about posting Dante Gabriel Rossetti's painting as I saw it a year ago at the San Diego Museum of Art's PreRaphaelite exhibit, but I liked this one better; she's calmer, more "normal" which agrees with the above opinion that Mary Magdalene was not the same Mary who was a prostitute, nor was she the mother of Jesus' child (and thus the "real Holy Grail", as presented in Dan Brown's fictional book, The Da Vinci Code.

May we all follow Mary Magdalene's example of love and devotion to Christ and support of His ministry as He gifted us with eternal Life and Love. Mary loved Jesus with all she had and with all she was--which is the hope and prayer of every Christian as we sojourn through this life and look to the Next.

Walking in the example of Mary and the Love of Christ,

(Edited from the Archives, one of the five most popular posts ever on this blog)
Posted by Susanne Barrett at 1:07 AM

Thank you for re-posting this Susanne. It's beautiful and moving!