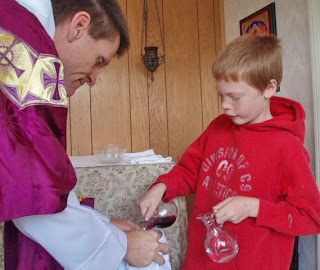 This afternoon while consuming some delicious leftover Chicken Parmigiana (one of our family's specialities), I scrolled through Facebook and discovered a new post from Michael Spencer, a.k.a The Internet Monk on a Baptist Concept of Communion. Intrigued (especially as our Evangelical Free Church is quite similar to the Baptist denomination in many ways), I started perusing the article, gearing up in my mind to disagree with the Baptist professor Michael has interviewed. Imagine my pleased surprise in finding myself "Amen"-ing Dr. Timothy George in my head as I read his reply to Michael's question. I reproduce the question and answer below in their entirety:

[Michael writes:] ...Dr. Timothy George continues to serve as the founding dean of Beeson Divinity School at Samford University in Birmingham and a senior editor of Christianity Today. He is a participant in the project known as Evangelicals and Catholics Together and also serves on the International Baptist-Catholic Dialogue team.

I recently wrote Dr. George and asked for his comments on this question: “How can Baptists respond to Catholic and Orthodox Christians who challenge our view of the Lord’s Supper as having no deeper historical/Biblical roots than Zwingli?”

Dr. George was kind enough to send along this reply. I’m deeply appreciative of his generosity.

Among many Baptist Christians there is a growing awareness that the Supper of the Lord should have a more prominent (and frequent) place in the life of worship, as it certainly did in the early church. There is also the realization that a more robust doctrine of (what Calvin called) the real spiritual presence of Christ in the Supper is called for by the participationist language of the New Testament itself and is in keeping with the best traditions of Baptist life. No less a figure than Charles Haddon Spurgeon portrayed the Lord’s Supper as nothing less than an encounter with the living Christ himself: “At all times when you come to the communion table, count it to have been no ordinance of grace to you unless you have gone right through the veil into Christ’s own arms, or at least have touched his garment, feeling that the first object, the life and soul of the means of grace, is to touch Jesus Christ himself.” [Note from Susanne: This quote from Spurgeon deserves copying into my Quotations Journal!]

For most of our history, Baptists have been more concerned with the externals of the Table—grape juice or real wine, who may preside, who may partake—rather than with the question of what actually goes on at this sacred meal. It is well known that Luther and Zwingli differed strongly, and actually broke fellowship with one another, over the meaning of the words of institution, “This is my body.” Historically, Baptists have belonged more to the Reformed (whether Zwinglian or Calvinist) side of that debate, but it is important to realize that all of the mainline reformers reacted against the displacement of the Lord’s Supper as the central focus of Christian worship in medieval Catholicism. They criticized the fact that the Eucharist had become clericalized (the service in Latin and only bread for the laity), commercialized (votive masses used as a fundraising scheme in much of the church), and scholasticized (the dogma of transubstantiation and the view of the mass as a sacrifice).

The reformers harked back to the teaching of the New Testament, the practice of the early church, and especially to the theology of St. Augustine. Augustine argued that in the sacrament the sign must be identified as a sign by a word spoken about it, thus making the sacrament itself a “visible word.” In commenting on John 6:50, Augustine wrote: “ ‘He who eats of this bread will not die.’ But that means the one who eats what belongs to the power of the sacrament, not simply to the visible sacrament; the one who eats inwardly, not merely outwardly; the one who eats the sacrament in the heart not just the one who crushes it with his teeth” (In Ev. Joh. Tract. 26.12). While Luther could speak of the manducatio impiorum, “the eating of the ungodly,” the Reformed tradition picked up Augustine’s distinction and emphasized the cruciality of faith for the proper reception of the beneficium of grace in the Supper. This same theology they found echoed in other pre-reformation figures including Ratramnus, Wycliffe, and Hus. What they rejected, in keeping with Luther, was an understanding of the sacrifice of the mass as an expression of works-righteousness, a theology which seemed to them to undermine the all-sufficiency of Jesus’s once-and-for-all death on the cross—where, as Cranmer’s Book of Common Prayer put it, he offered “a full, perfect, and sufficient sacrifice, oblation, and satisfaction, for the sins of the whole world.”

Since the sixteenth century, and especially in the liturgical renewal stemming from Vatican II, many of the changes called for by the reformers have been accepted in the practice of the Catholic Church. Yet important, church-dividing differences still remain and I think the Church of Rome is right to resist the kind of easy-going ecumenism that would ignore such differences in order to achieve a false unity. In our discussions with our Catholic brothers and sisters, we Baptists and evangelicals must learn to distinguish the unity we are called to affirm and the divisions we must still sustain. But this we should do in the spirit of Jesus’s high priestly prayer for his disciples in John 17—“that they may be one, Father, as you and I are one so that world may believe.”

I agree with basically everything that Dr. George writes above which is quite remarkable given my Anglicized view of the Eucharist. I only hope that more Baptist, other evangelical denominations, and non-denominational pastors/churches take heed and follow through on Dr. George's views of both Communion and ecumenism; I truly appreciate how he writes of Catholics as our "brothers and sisters" as he strives for respect and unity within our catholic (universal) Christian Church.

Posted by Susanne Barrett at 2:00 PM