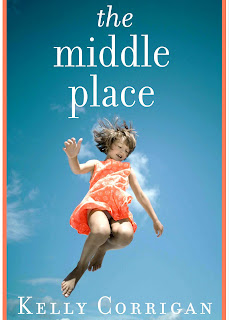 Warning: The review below contains a few mild plot spoilers, but no more than one would gain from reading the dust jacket.

When our Logos Reading and Discussion Group at Lake Murray Community Church recommended books for our third year, my friend Kim highly recommended The Middle Place by Kelly Corrigan (2008). It was one of the few books on our combined lists with which I was not familiar, but I took Kim's recommendation quite seriously and, after checking that our library system had adequate copies, put it on the schedule for July. The discussion was moved to August when Kim's nursing schedule conflicted because we really want her to be present as she has recommended the book so highly. And it's actually the first book in about a year that I haven't spent all of the Saturday before our meeting frantically finishing; I completed it last night and am feeling rather smug, thankyouverymuch.

I started the book just last weekend and was immediately sucked into Corrigan's easy-breezy, humorous prose that sparkles despite the serious subject matter: cancer. Kelly Corrigan, a mother in her mid-thirties to two girls three and below, finds a lump and walks us through diagnosis and treatment with a tone of humor, reality, and poignancy. Intermixed with her present experiences of wife, mother, and cancer patient are scenes from her childhood as George Corrigan's daughter -- growing up with a bubbly Irish Catholic lacrosse coach who cheered his children constantly, always looking for and seeing the best in his children as well as in everyone he meets.

Kelly Corrigan examines "the middle place" where she is both child and parent, telling stories of her childhood fraught with joy and hilarity juxtaposed against her diagnosis and treatment for bre*ast cancer which she attempts to handle with her father's positive outlook and his unfailing support. She leans on her father almost as much as her husband, sometimes wishing her husband to be as supportive as her father, but they come behind her in different and helpful ways, and she learns to value and love her husband even more as she endures treatment. Corrigan's writing sparkles with details that make her writing ebb and flow in just the right places, transparent in a human way that almost everyone will be able to relate to.

Her writing reminds me of Anne Lamott's -- that self-deprecating humor, the transparency, not concerned with making herself "look good" but wanting to not only remove the mask we all hide behind but stomp on it with ecstatic joy in our humanity. I found myself laughing and crying as I read, especially as Kelly struggles with her dad's diagnosis of prostate cancer shortly after her own diagnosis. Living on opposite coasts, they pull together in their common treatments, George Corrigan relying on his robust, devout Catholic faith and Kelly relying on friends and family as well as on her father's faith, a faith she seems close to embracing by the end of the book -- although I may be reading between the lines a bit too much.

The genre of the memoir is one of my favorites which can be seen in my list of favorite modern writers: Anne Lamott, Kathleen Norris, Frederica Mathewes-Green, Fr. James Martin, Peter Gilquist, Donald Miller, Scott Hahn, Thomas Howard, especially when these writers are focused on the development of their Christian lives. Kelly Corrigan falls short in this one area of not writing about her faith (although she does discuss her father's faith), but I still absolutely enjoyed The Middle Place and look forward to what Kelly Corrigan might be working on right now. I can't wait to discuss her book tomorrow (Sunday) afternoon with my Logos friends, especially as we have some new people coming over the summer.

And next month: Les Miserables! I'd better start reading NOW....

Posted by Susanne Barrett at 12:00 PM

Thanks for the book review Susanne. I just started reading Bird by Bird and am loving it!