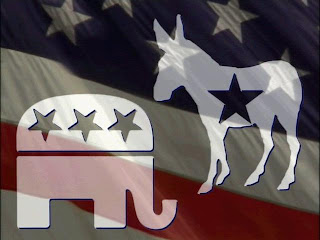 As I type this, I just heard on Fox News and CNN that Senator Edward Kennedy died this evening at age 77 from brain cancer after serving in the US Senate since 1962, one of the longest-serving Senators ever and the youngest of the nine Kennedy offspring. As a conservative-leaning person, I have disagreed far more with the late Senator than I have agreed with him, although I have found myself on "his side" in a few issues.

The "rivalry" (for lack of a better word) between liberals and conservatives is something that has deeply troubled me. Tonight I read an article that quite nicely summarized many of my experiences on the university campuses (campii??) at which I have taught. You may read it here: Perspectives: Republicans Are Evil.

I grew up with my father's staunchly Democratic parents on one side and my mother's conservative family on the other, despite the fact that my staid, proper Democratic grandparents looked down upon my mom's rather wild "hippy" Republicans -- rather an upside down situation. Later (probably after his father's death) my dad changed his party affiliation to Republican, and myself, my brother, and my sister remain committed to conservative values of small government, the value of small businesses, states' rights over government control, lower taxes, etc. Even though I didn't find John McCain a true fiscal and social conservative, I and our four children volunteered in the local Republican Party office because we believe strongly in small government and states' control rather than a large federal government.

At age 18 I voted proudly for Ronald Reagan. I gritted my teeth through Clinton's eight years yet found myself frustrated with George W. Bush for not taking a more conservative stand on national safety at our California/Mexico border, of which I live a mere 17 miles north. I greatly admire Alan Keyes whose articulation of the conservative platform and lack of politico-speak led me to vote for him in the primaries of 2000 and 2008; thus, I voted for an African-American candidate eight years before Barack Obama and again during Obama's campaign as well.

But the utter hatred I have experienced because of my rather conservative views has shocked me. The first semester that I taught at Point Loma Nazarene University in San Diego was the fall of 1992 when Bill Clinton was elected President, and California also ushered in two Democratic female Senators: Dianne Feinstein and Barbara Boxer, both of whom remain in office nearly twenty years later. The majority of students in my classes were upset on the morning after the election, but the majority of the Literature Department Faculty were ecstatic. One female professor asked me happily, "Aren't you thrilled that we've elected two women Senators?" I replied, "Not those women." She looked shocked, her smile disappearing. Somehow, because I was an educator, it was assumed that I was liberal. I have nothing against the idea of female Senators; I simply agree with very little if anything that Feinstein and Boxer support.

I was still teaching at Point Loma during the 1996 presidential campaign and was berated by a beloved literature professor for supporting Dole over Clinton. I was accused of wanting to take school lunches away from needy children, and when I asked in disbelief if this professor truly believed that Republicans were "out to starve children," he banged his fist on the secretary's desk and cried, "Yes! They are all rich white men who are greedy warmongers and who enjoy nothing better than starving poor children!" I tried to explain that with lower taxes, our family's small business could actually support our children so we could pay for our own children's lunches, but he insisted that Republicans indeed were evil.

But one can indeed be a "compassionate conservative" who wants to be a good steward of our environment (but sees that balance is quite possible and desirable between being "green" and being a member of PETA). One can support Welfare reform and still be compassionate toward the poor -- such as serving dinner at a local homeless shelter, a monthly event that our church does monthly. One can indeed support education choices ("school vouchers" and home schooling) and be an educator. One can support private, faith-based programs for caring for the poor rather than the government. One can be against abortion and not support government-run health care but still be a caring person ... one who values life and health but doesn't want the same government that is almost twelve trillion dollars in debt and charges $500 per toilet seat to attempt to run our health care system. Canadians with a similar system who can afford to do so often creep over the border and pay for their health treatments in the US, but the poor up north are stuck with the Canadian system with insanely and dangerously long waits for treatment. A friend who admires Obama likened health care reform to school choice -- but with school choice, only the rich can afford private schools and everyone else is stuck with public education unless one is willing to give up a career and home school their children ... and still pay full property taxes. Not much of a choice, really.

The article's point and mine: Republicans really are not "evil people who wish to starve poor children." Our family income is well below average; small business owners get short shrift when it comes to our federal government, so for our benefit, we see that less government is better government. The federal government should protect our borders, provide national defense, and keep to the simple stuff that the Constitution permits them to do. Even the federal income tax is technically illegal, a fact that FDR admitted at the time he proposed it. Let the federal government take care of what it is supposed to, and allow the states to deal with the rest. And that's certainly not an "evil" idea ... although I am sure some will indeed call it (and me) so. And it will be far from the first time, unfortunately.

Posted by Susanne Barrett at 10:41 PM

Email ThisBlogThis!Share to TwitterShare to FacebookShare to Pinterest
Labels: Politics

It's hard to stand up for what you believe in, isn't it? You make some excellent points.