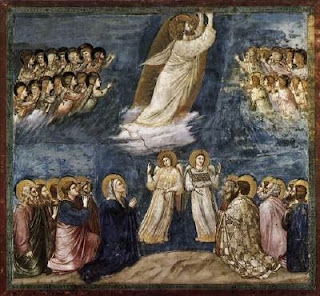 This morning at Morning Prayer and Holy Communion at Victoria House, we celebrated Ascension Day, one day late. But as we're still within the octave of Ascension, we're fine.

Ascension Day occurs the 40th day after the Resurrection of our Lord when Christ ascended from earth to the right hand of the Father on High. We read about this event in the first chapter of the Acts of the Apostles, which is also the Epistle reading for today's service:

The Epistle: Acts 1:1-11:
In the first book, O Theophilus, I have dealt with all that Jesus began to do and teach, 2 until the day when he was taken up, after he had given commands through the Holy Spirit to the apostles whom he had chosen. 3 He presented himself alive to them after his suffering by many proofs, appearing to them during forty days and speaking about the kingdom of God.

4 And while staying with them he ordered them not to depart from Jerusalem, but to wait for the promise of the Father, which, he said, “you heard from me; 5 for John baptized with water, but you will be baptized with the Holy Spirit not many days from now.”

6 So when they had come together, they asked him, “Lord, will you at this time restore the kingdom to Israel?” 7 He said to them, “It is not for you to know times or seasons that the Father has fixed by his own authority. 8 But you will receive power when the Holy Spirit has come upon you, and you will be my witnesses in Jerusalem and in all Judea and Samaria, and to the end of the earth.” 9 And when he had said these things, as they were looking on, he was lifted up, and a cloud took him out of their sight. 10 And while they were gazing into heaven as he went, behold, two men stood by them in white robes, 11 and said, “Men of Galilee, why do you stand looking into heaven? This Jesus, who was taken up from you into heaven, will come in the same way as you saw him go into heaven.”

The Gospel reading is from the Gospel according to Saint Luke.

The Gospel: Luke 24:49-51
49 And behold, I am sending the promise of my Father upon you. But stay in the city until you are clothed with power from on high.”

50 Then he led them out as far as Bethany, and lifting up his hands he blessed them. 51 While he blessed them, he parted from them and was carried up into heaven. 52 And they worshiped him and returned to Jerusalem with great joy, 53 and were continually in the temple blessing God.

The Collect for the Octave of Ascension:
GRANT, we beseech thee, Almighty God, that like as we do believe thy only-begotten Son our Lord Jesus Christ to have ascended into the heavens; so we may also in heart and mind thither ascend, and with him continually dwell, who liveth and reigneth with thee and the Holy Ghost, one God, world without end. Amen.

So enjoy the Octave of Ascension, remembering the glory of our Lord this very moment...and the fact that "He is coming again in glory to judge the quick and the dead [as] His kingdom has no end...."

Posted by Susanne Barrett at 11:33 PM