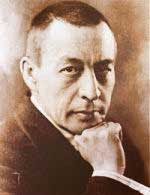 As I described in my birthday post, my dear friend from grad school, Carmen treated me to a lovely concert at her church on Sunday afternoon. Part of Rancho Bernardo's San Rafael Parish Church's 2008 Sacred Voices Concert series, the La Jolla Symphony Chorus, directed by David Chase, performed Rachmaninoff's "All Night Vigil," more commonly called "Vespers." With only bells in the interludes between the fifteen sections, this a capella choral piece, sung in Russian, was gorgeous. Carmen and I both felt inclined to close our eyes and focus on the music only, but both of us were afraid of being accused of sleeping through the music. :)

We were given programs as we walked in that provided a dual translation with the original Russian on the left and the English translation on the right. I recognized several of the pieces from the Anglican Evening Office, including the ancient Phos Hilaron (Greek for "hilarious light") that Pastor Rollo taught us at Lake Murray and that I've also used at Alpine Anglican, and The Magnificat (Mary's song in the first chapter of the Gospel of Saint Luke. I definitely recognized portion fo several psalms and other passages of Scripture as well -- the piece is so rich in Biblical texts used to create glorious praise.

You'll have to imagine the gracious power of the a capella music, sung by sixty or so musicians, sometimes singing low and gently and other times almost blasting me back into my seat with the sheer power of their voices. The modernity of the San Rafael sanctuary seemed slightly at odds with the age of the music which seems older than it is as Rachmaninoff was inspired by medieval Gregorian chant in nine of the fifteen movements (or so my program informed me). But it was still nice to gaze at the stained glass windows high above that encircled the theatre-in-the-round design of the sanctuary.

Our program also mentioned that Rachmaninoff's majestic piece was published near the end of the "Golden Age" of Russian Orthodox music that had begun in the 1880's. "Vespers" premiered in 1915, and in 1917 the Bolshevik Revolution overtook Russia, and by 1918, all religious music was banned, leaving this treasure neglected for decades. It takes its texts from the all-night Easter vigil service, starting with Vespers (evening service on Saturday night) and concluding with Matins (the service beginning at daybreak on Easter Sunday), the work being introduced with a call to worship and finished with a concluding hymn.

Here are two movements, the seventh and the fourteenth, the opening and closing of the Matins (sunrise) service:

(The latter half is how we open Morning Office of Prayer in the Anglican tradition as well, without the repetition.)

14. Christ Is Risen from the Grave (Znamenny Chant)
Troparia of the Day of Resurrection
Thou didst rise from the tomb and didst destroy the bonds of death.
O Lord, Thou didst destroy the condemnation of death,
And didst deliver all men from the snares of the enemy.
By revealing Thyself to Thy apostles
Thou didst send them to proclaim Thee.
Through them Thou hast given peace to the universe,
O only Merciful One!

Carmen and I sat through a blissful hour, moved by the music to a place of adoration of the risen Christ -- He who came to seek and save the lost as well as to encourage and strengthen the believers. This concert was a profound gift from Carmen, one that made my birthday incredibly special and definitely memorable. So thank you, Carmen, for this glorious gift, and thanks to your parish church that realizes and celebrates the best of music that gives voice to our love of and devotion to our Lord and Saviour.
Posted by Susanne Barrett at 1:40 PM

I recently purchased a CD of Rachmaninov's Vespers and have been looking for an English translation with no success (except for finding your post). Do you know where I can find a full translation?