At oh-dark-thirty on Thursday morning, the kids and I got up, ate a quick breakfast, packed the van, and got on the road to Orange County to meet my parents and my brother and his kids in Buena Park. As I drove, the kids and I listened to Jim Dale's excellent reading of Harry Potter and the Order of the Phoenix. By 9:45 we were pulling into the Holiday Inn Parking lot ten minutes after my parents and ten minutes before my brother. As our rooms were not ready, we locked the vehicles and hopped on a shuttle to Knott's Berry Farm, loading my wheelchair as we boarded. Once inside the park, we made a beeline for the log ride, a longtime favorite ride with a good-sized drop at the end with a splash to boot. The kids also rode their favorite coaster, The Silver Bullet, and we enjoyed the Wild West Stunt Show photographed below: 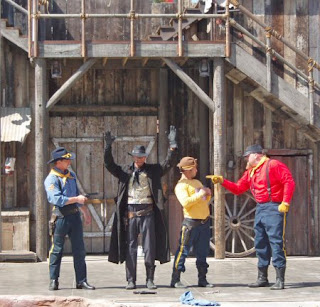 We ate hamburgers in the Ghost Town area, and strolled through the rest of the park, allowing kids to board ride after ride, coaster after coaster. Okay, I did do the bumper cars with the kids as well as the Calico Mine Ride. We were wearing down by our 4:40 shuttle pick up time and went back to the hotel where we unloaded the cars and found our rooms, all beside each other with sliding doors opening onto little patios fenced in with black rod iron gates. We took the kids swimming in the very warm pool while Mom and I kicked back in the jacuzzi. After dinner in the hotel restaurant -- which was very good! -- we headed to bed with T sleeping with my brother and his kids, E sleeping with my parents in their room, and the two younger boys with me in our room.

On our second day we ate breakfast in the hotel restaurant and headed back to Knott's for a second day of coasters, shopping, and rides. We enjoyed lunch at Mrs. Knott's Chicken Dinner Restaurant and also went through several of the shops in the Ghost Town and other spots. By the 3:40 shuttle pick-up, we were exhausted and gladly went back to the hotel where I took a two-hour nap while my brother took the kids swimming again. After a light dinner in the hotel restaurant, we all crashed, absolutely drained.

After breakfast in the hotel restaurant Saturday morning, we packed up, checked out, and drove over to the replica of Independence Hall directly across the street from the Knott's entrance. We enjoyed the chicken and gardens as we approached the replica (shown below): 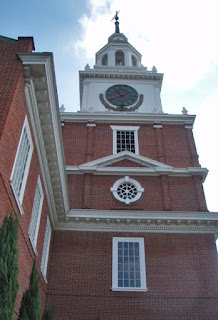 We explored the Liberty Bell replica inside the Hall as well as the replica of the room in which the Declaration of Independence was signed. The gift shop contained amazing items for sale, including replicas of the Declaration, the Constitution, Colonial and Confederate monies, etc., as well as historical displays in the corners.

After getting back to our cars, we followed my parents to the Discovery Science Center about ten miles south on I-5 in Santa Ana to spend the rest of the day. We had considered going to Universal Studios, but the cost of $50 per person was prohibitive, and we had always wanted to check out this "big black cube" hanging over the freeway that we passed on our trips to Disneyland and Knott's each year. The kids thoroughly enjoyed the experience (less than $100 for all ten of us for admission), blowing huge bubbles, climbing rock walls, making smoke rings and smoke tornados, playing a laser harp, creating their own animation films, climbing on dinosaur fossil replicas, testing their reflexes, playing on computers, building sand dams, etc. Below you can see Cousin M and T climbing sideways along the wall without touching the ground: 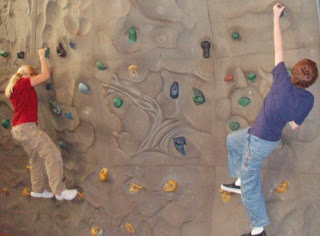 Mom and Dad left after lunch, and my brother Tom and I left with the kids about an hour and a half later. I took a short detour to drive past the gorgeous Mission at San Juan Capistrano even though I didn't have time to stop (or a place to park). My mom grew up in San Juan and has talked so much about the town and the mission and the swallows that come back each year on the same day that the place holds a special attraction to me. I know my dad's home town of San Clemente much better as my grandparents lived there while I was growing up and I often went there for summer visits or holidays. But I know little about San Juan and would like to explore it far more. Some day....

We drove into our town in a shower of light hail and pulled into the driveway ay 6:15 PM, absolutely worn out. I crumpled onto the sofa after unpacking a little and watched the NCIS marathon. Around 8:30 I looked out and saw ... snow! Yes, snow in mid-March in Southern California. Here are a few photos I took this morning just before church: 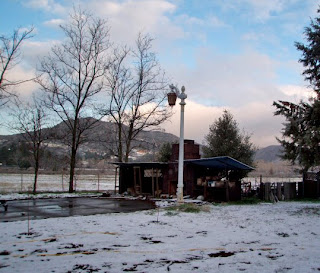 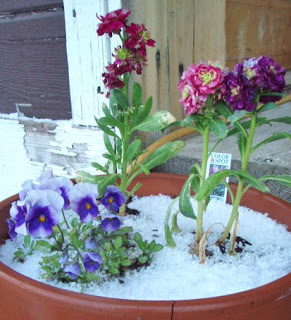 So we had a lovely trip. It's always tiring but always fun to watch the kids have so much fun. Keith stayed home as he sprained his back recently and wouldn't have been able to ride any of the coasters and would have been uncomfortable walking around so much. Tom's wife also didn't come except for a quick stop over on Friday night as she was quite ill with some kind of abdominal infection; she left Saturday morning to check herself into the ER. My sister and her family couldn't make it out to CA from Montana where they moved a couple of years ago, so we were a small group of ten rather than the usual horde of 16. But it was still a great time, a wonderful birthday present to the entire family from my parents.

If you'd like to see more photos of our Orange County Trip and of our surprise snow, you can click here to go to my 365 photo blog. (You may need to scroll down a little to find them; as there are multiple entries I'm sending you to the general 365 blog instead of to a specific page, plus they are in backwards chronological order.)
Posted by Susanne Barrett at 6:22 PM