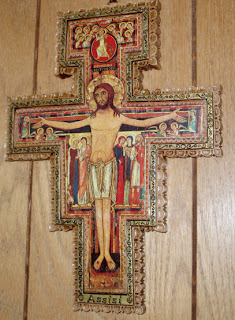 Above is the icon of Jesus that graces the front of tiny Victoria Chapel where this morning we celebrated the second day of the Ascension Octave (eight-day observance).

The Collect for Ascension Day is prayed on each day of the Octave, and we prayed it together this morning also:

Grant, we beseech thee, Almighty God, that like as we do believe thy only-begotten Son our Lord Jesus Christ to have ascended into the heavens; so we may also in heart and mind thither ascend, and with him continually dwell, who liveth and reigneth with thee and the Holy Ghost, one God, world without end. Amen.

The Preface for the Octave of Ascension, which is said after the various prayers in the liturgy of Holy Communion, reads thus:

Through thy most dearly beloved Son Jesus Christ our Lord; who, after his most glorious Resurrection, manifestly appeared to all his Apostles, and in their sight ascended up into heaven, to prepare a place for us; that where he is, thither we might also ascend, and reign with him in glory.

So after the Octave of Ascension is over, Pentecost (or Whitsunday, as the Church of England cals it) will be just two days hence! It's also one of my favorite Holy Days, another one that I wish the evangelical churches took more notice of. The Church Calendar is such a cool thing, especially as it points continually to the life and death and resurrection of Jesus! The Sunday after Pentecost, Trinity Sunday is observed. Then we'll return to the days of Ordinary Time which round out the Church Calendar, until Advent arrives in late November. Oh, there will be saints' days to remember and observe, but the Holy Days will be done once Trinity is past.

The 1928 Book of Common Prayer numbers Ordinary Time by how many Sundays each week is after Trinity ... 15th Sunday after Trinity, etc. It gets a bit confusing for a newbie like myself to keep track of which Sunday is which, but at least this year Father Acker gave me an Anglican calendar with the Sundays in Trinity clearly numbered; last year I numbered them myself on a secular calendar so I wouldn't get too lost.

But I don't want to get ahead of myself; we are celebrating Ascension now and Pentecost and Trinity soon!

So a Blessed Ascension to you all, and for six more days....
Posted by Susanne Barrett at 1:55 PM