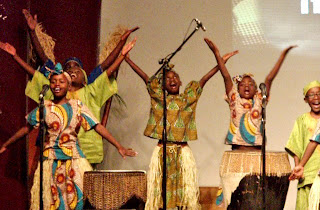 Last night at Lake Murray we enjoyed a wonderful choir made up completely of children from the Kampala region of Uganda. These kids, the Children of the World Choir, performed praise songs mostly in English but a few in their own language. I would love to have a tenth of their energy!

Yet these children who sang so joyfully about God's love have experienced great tragedy. Each child has lost at least one parent, if not both, to AIDS and have been either orphaned or abandoned by remaining family members who couldn't afford to feed them. These children have experienced grief, poverty, hunger, and hopelessness. And they certainly aren't alone. The brochure that we were handed by the children as we walked into the sanctuary contained a message from Bono:

"Imagine for a moment that 10 million children were going to lose their lives next year due to the earh's overheating. A state of emergency would be declared and you would be reading abou little else. Well, next year, more than 10 million children's lives will be lost unnecessarily to extreme poverty, and you'll hear very little about it. Nearly half will be on the continent of Africa, where HIV/AIDS is killing teachers faster than you can train them and where you can witness entire villages in which the children are the parents.

Will American Christians stand by as an entire continent dies?"

-- Bono, Singer in the Irish rock band U2 and leader in the global fight against AIDS.

The video we were shown halfway through the choir's presentation gave some alarming statistics that were not new to me but may be to some:
~ More than 15 million children in Africa have been orphaned by AIDS
~ By 2010, that number is expected to increase to 40 million
~ Of the 42 million people living with HIV/AIDS, 70% of them are in sub-Saharan Africa
~ Only 14% of born-again Christians said that they would help HIV/AIDS orphans overseas

World Help, the organization that brings the Children of the World Choir to the United States for concerts and educates churches as well as Christian schools and universities, has some goals to help these young children, striken by poverty across the globe.
~ Their Child Sponsorship Program ($30/month) has provided over 31,000 sponsorships in 22 countries between 1991 and 2007.
~ They are committed to building "Villages of Hope" in sub-Saharan Africa where up to 48 orphans will live in four small, family-like Homes of Hope headed by a caregiver. These Villages of Hope will not isolate the children from their culture but will be located near or in existing villages and thus will utilize local schools and medical clinics for the children. Older children will receive vocational skills and training. Churches can work together to build a Home of Hope ($25,000) or a Village of Hope ($100,000).
~ World Help's goal is to impact 1 million children affected by HIV/AIDS, and they are about 30% of the way to their goal.

The brochure states, "The children who live in the Homes of Hope will be bathed in God's love as they grow. They will see His love in action every day, and will grow up within their culture, rather than removed from it.

Our vision is to see hundreds of villages and homes, caring for thousands of children whose lives have been turned upside-down by HIV/AIDS!"

So while we enjoyed the concert, especially the end where the kids came down the different rows, hugging everyone, we also were educated about the urgent plight of poverty across the world, especially in Africa as a result of HIV/AIDS. When we saw the kids a year ago, E was really touched by them, and she was this year as well. Once Keith gets steadier work, we'd really like to sponsor a child through World Help.

Email ThisBlogThis!Share to TwitterShare to FacebookShare to Pinterest
Labels: Church, Global Events, U2

hi friend,
really i like this post,i pray to god that no one should be affected by aids.your blog is informative,i like to share my link.visit my walkitz.blogspot.com