A Prayer for our New President 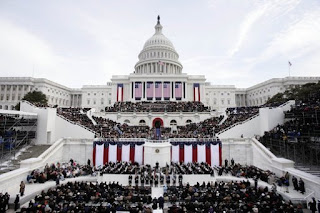 The kids and I watched the inauguration of Barack Obama today, and as I listened to his speech, I prayed. I pray that he can indeed keep our country safe from terrorist attacks. I pray that every decision will be in the best interest of the entire country. I pray that he will seek God with all humility. I hope he can succeed as president. I am concerned about his lack of experience and his views of the role of federal government that differs from my own. But I can only hope and pray.

And as I pray for him this prayer, cobbled together from two prayers from Morning Prayer in the 1928 Book of Common Prayer:

O Lord, our heavenly Father, the high and mighty Ruler of the universe, who dost from thy throne behold all the dwellers upon earth; Most heartily we beseech thee, with thy favour to behold and bless thy servant Barack, THE PRESIDENT OF THE UNITED STATES, and all others in authority; and so replenish them with the grace of thy Holy Spirit, that they may always incline to thy will, and walk in thy way./ Fill them with the love of truth and righteousness; and make them ever mindful of their calling to serve this people in thy fear; through Jesus Christ our Lord, who liveth and reigneth with thee and the Holy Ghost, one God, world without end. Amen.

This prayer here is the first time I have not prayed for "George, THE PRESIDENT OF THE UNITED STATES and for Barack, THE PRESIDENT-ELECT" as I have been praying since November. I usually add prayers "for Arnold, our Governor, for the leaders in Congress and the State Legislatures, for the judges across our land, and for all in authority...."

I also sent out via e-mail the web address of the Presidential Prayer Team, an organization that started soon after September 11 with the aim of praying daily for our President. Each Thursday I receive a list of prayer requests for our President, for Congress, for other national and global concerns, and for our military, and I have found them quite helpful. They are starting a special push to pray for President Obama's first 100 Days in office.

The history of today was remarkable. I appreciated Rick Warren's prayer and seeing all of the living Presidents and Vice-Presidents. The peaceful transition of power from one President to another was astounding back in 1797, and it's still quite an incredible thing to watch, live on TV. And the election of the first African-American President was indeed wonderful -- even if I would have preferred to see a different African-American with his hand on the Lincoln Bible (such as Alan Keyes).

But we watched history happen today, with some real reservations and with a great deal of prayer. Our family volunteered quite a few hours for the other guy, but it's going to be a tough four years for whomever works in the Oval Office. And Mr. Obama is going to need our support and prayers in order to govern well in these troubled times, so we will do our part.
Posted by Susanne Barrett at 11:15 PM