Judgment of the Next Generation 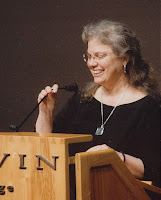 One of my favorite Christian writers is Frederica Mathewes-Green, an Eastern Orthodox writer who used to be Episcopalian. I've read just about all of her books and have met her twice -- she's so lovely. She used to be a hardcore 70's feminist and then God spoke into her life ... and the life of her husband. Now he's an Orthodox priest and she writes about their little parish and about Orthodox with humor and wonderment. Her latest articles can be read at her website, along with her testimony and information about Orthodoxy -- and her list of wonderful, wonderful books: Frederica Mathewes-Green.

Frederica started her writing career with a book on the abortion debate, an attempt to get both sides to truly listen to each other and dialogue with each other in a non-confrontational manner. And her latest article in the National Review addresses the abortion debate again. The whole article can be read on her website: Judgment of the Next Generation.

Here are some excerpts from the article:

When I was a young fire-breathing college feminist in the early 70’s, we didn’t see abortion as a melancholy private decision—it was an act of liberation. By choosing abortion, a woman could show that she was the only person in charge of her life, and bowed to no one else’s control. But this formulation turned sour as the grief felt by post-abortion woman began to accumulate. The flip side of autonomy is loneliness, and for many women, their abortion decision was linked to emotional abandonment.

And then there was the advent of ultrasound technology, enabling live images of a baby moving in the womb. In 1989, word went round the pro-life movement to order the tape of pollster Harrison Hickman’s presentation at that year’s NARAL convention. On it he said, “Nothing has been as damaging to our cause as the advances in technology which have allowed pictures of the developing fetus, because people now talk about that fetus in much different terms than they did 15 years ago. They talk about it as a human being, which is not something that I have an easy answer how to cure.”

So there are some reasons to think that the abortion question has not been settled, but has merely gone underground. That might be a necessary step. It has to go away so that it can be rediscovered, and seen in a fresh light.

But the time is coming when a younger generation will be in charge, and they may well see abortion differently. They could see it, not as “a woman’s choice” but as a form of state-sanctioned violence inflicted on their generation. It was their brothers and sisters who died; anyone under the age of 36 could have been aborted (and somewhere around a fourth or a fifth of all pregnancies, in fact, are aborted). A younger generation might feel a strange kinship with the brothers and sisters, classmates and coworkers, who are missing.

And I’m afraid that, if they do see things that way, they aren’t going to go easy on my generation. Our acceptance of abortion is not going to look like an understandable goof. The next generation can fairly say, “It’s not like they didn’t know.” They’ll say, “After all, they had sonograms.” And they may judge us to be monsters.

Maybe that won’t happen. Maybe future generations won’t think twice about abortion. But even we who have grown sick of talking about it still harbor some doubts. In particular, people who think of themselves as defenders of the weak and the oppressed must have many a quiet moment when they wonder, “How, in this one issue, did I wind up on the side that’s defending death?”

Frederica's views after twenty-some years of working with both sides of the abortion debate have given her wisdom and insight into both the pro-life and pro-choice camps. There are certainly no easy answers, no clear-cut course to take. But thinking carefully without judging may be a way to finally make progress in a difficult, difficult problem that truly possesses life-and-death importance.
Posted by Susanne Barrett at 10:40 PM

Thanks for bringing her article to my attention, S. It is in the forefront of my mind right now as I heard yesterday on the news that our President has now lifted the ban on taxpayer funding of overseas abortions. Sigh.

Your link to F.'s books is not working...

I got it to work now. :) Thanks for your comment.