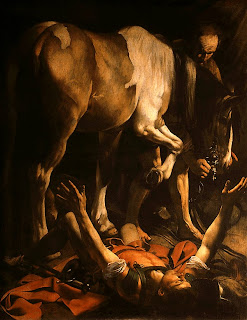 ("The Conversion of Saint Paul" by Murillo)

Yesterday, January 25, marked the celebration of one of the most dramatic events in the Acts of the Apostles, perhaps in the entire New Testament. The story is told in the ninth chapter of St. Luke's account of the rise of the early Christian Church:

9:1 But Saul, still breathing threats and murder against the disciples of the Lord, went to the high priest 2 and asked him for letters to the synagogues at Damascus, so that if he found any belonging to the Way, men or women, he might bring them bound to Jerusalem. 3 Now as he went on his way, he approached Damascus, and suddenly a light from heaven flashed around him. 4 And falling to the ground he heard a voice saying to him, “Saul, Saul, why are you persecuting me?” 5 And he said, “Who are you, Lord?” And he said, “I am Jesus, whom you are persecuting. 6 But rise and enter the city, and you will be told what you are to do.” 7 The men who were traveling with him stood speechless, hearing the voice but seeing no one. 8 Saul rose from the ground, and although his eyes were opened, he saw nothing. So they led him by the hand and brought him into Damascus. 9 And for three days he was without sight, and neither ate nor drank. (English Standard Version)

The Collect for this day from the 1928 Book of Common Prayer reads:

O God, who, through the preaching of the blessd Apostle Saint Paul, hast caused the light of the Gospel to shine throughout the world; Grant, we beseech thee, that we, having his wonderful conversion in remembrance, may show forth our thankfulness unto thee for the same, by following the holy doctrine which he taught; thriough Jesus Christ our Lord. Amen.

From AmericanCatholic.org is a wonderful message about Saint Paul's conversion:

Paul’s entire life can be explained in terms of one experience—his meeting with Jesus on the road to Damascus. In an instant, he saw that all the zeal of his dynamic personality was being wasted, like the strength of a boxer swinging wildly. Perhaps he had never seen Jesus, who was only a few years older. But he had acquired a zealot’s hatred of all Jesus stood for, as he began to harass the Church: “...entering house after house and dragging out men and women, he handed them over for imprisonment” (Acts 8:3b). Now he himself was “entered,” possessed, all his energy harnessed to one goal—being a slave of Christ in the ministry of reconciliation, an instrument to help others experience the one Savior.
One sentence determined his theology: “I am Jesus, whom you are persecuting” (Acts 9:5b). Jesus was mysteriously identified with people—the loving group of people Saul had been running down like criminals. Jesus, he saw, was the mysterious fulfillment of all he had been blindly pursuing.

From then on, his only work was to “present everyone perfect in Christ. For this I labor and struggle, in accord with the exercise of his power working within me” (Colossians 1:28b-29). “For our gospel did not come to you in word alone, but also in power and in the Holy Spirit and [with] much conviction” (1 Thessalonians 1:5a).

Paul’s life became a tireless proclaiming and living out of the message of the cross: Christians die baptismally to sin and are buried with Christ; they are dead to all that is sinful and unredeemed in the world. They are made into a new creation, already sharing Christ’s victory and someday to rise from the dead like him. Through this risen Christ the Father pours out the Spirit on them, making them completely new.

So Paul’s great message to the world was: You are saved entirely by God, not by anything you can do. Saving faith is the gift of total, free, personal and loving commitment to Christ, a commitment that then bears fruit in more “works” than the Law could ever contemplate. (Remember, this is from one of the premiere Catholic sites, and it seems quite clear that the doctrine of "salvation by works" is not being taught here. But I digress....)

Yet St. Paul remained joyful, using his time to write letters of love and admonition to the many churches he founded, letters that make up over half of our New Testament. Near the beginning of each epistle following his greeting, Paul tells each church body how he prays for them ceaselessly, how much he loves them, and how he is proud of them and of their growth in the faith. Yes, he sometimes has quite harsh messages for them in some areas, but he always "sandwiches" his reproving between praise and encouragement.

In my Divine Hours devotional by Phyllis Tickle are several prayers to mark this day. I couldn't decide whether I liked the Midday or the Vespers prayer best, so I'll just have to post both:

From the Midday Office: Almighty God, whose will it is to be glorified in your saints, and who raised up your servant Paul to be a light in the world: Shine, I pray, in my heart that I also in my generation may show forth your praise, who called me out of darkness into your marvelous light; through Jesus Christ my Lord, who lives and reigns with you and the Holy Spirit, one God, now and forever. Amen.

From the Vespers Office: Heavenly Father, Shepherd of your people, we thank you for your servant Paul, who was faithful in the care and nurture of your flock; and I pray that, following his example and the teaching of his holy life, I may by your grace grow into the stature of the fullness of our Lord and Savior Jesus Christ; who lives and reigns with you and the Holy Spirit, one God, for ever and ever. Amen.
Posted by Susanne Barrett at 1:41 PM