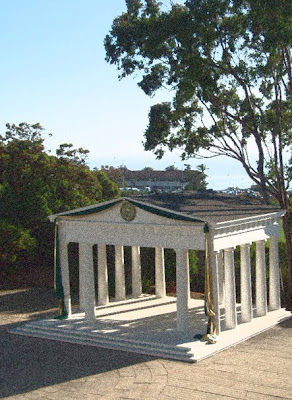 The Greek Amphitheater on the campus of PLNU, taken in late afternoon

I've been largely absent from the blogosphere this week for several reasons...but mostly because school has started, both for the boys and for Elizabeth who is attending Point Loma Nazarene University.

I attended PLNU for college and, after earning my Master of Arts in English, I returned to PLNU as a writing and literature instructor. So having Elizabeth choose PLNU and even return to my old department (Literature, Journalism, and Modern Languages) as a journalism major (I was a lit major) is so amazing. And being on campus for New Student Orientation was sooooo incredible....

We first parked the cars (E and Keith were in the van loaded with her stuff, the boys in the Corolla with me) and found our way to the beginning of the line where we were greeted by cheering upper class students. We stopped at tables for the wellness center, financial aid, and, after being personally greeted by President Brower, she had her picture taken for her student ID.

Before we knew it, E and I were tooling down toward the dorms in the van while Keith and the boys walked. As I was directed into a parking spot next to E's dorm, the van was swarmed by students from the university's sport teams who unloaded the van and got all of E's belongings into her room in three minutes flat. Keith and the boys then drove home while I stayed for the orientation. I helped E make her bed and start unpacking until the first General Session in the Greek Amphitheater, the oldest such theater in the western United States. Here the students began their official college experience in the same place in which they will graduate in four years.

Despite salt-tinged breezes wafting from the nearby Pacific, we baked in the late-afternoon sunshine. We sat near signs for each major, and after the welcome from President Brower and the new ASB President, we followed the major signs to each department where we were introduced to the professors in our students' majors. Elizabeth and I slipped into the last row in the Department of Literature, Journalism, and Modern Languages. One of the professors with whom I used to teach remarked to the group on my presence as a former major and instructor, now here with my daughter. I had the chance to chat with a few professors who were either my professors when I was a student and/or colleagues when I taught. It felt like "home" to me...and to Elizabeth, too, I think.

After dinner on tables set up across the lawns, I attended the Parent Reception while Elizabeth went to the G.A.P. (Get Acquainted Party) and we met again to attend Time Out, an evening worship service in Brown Chapel which was built during my sophomore year. I was soooo greatly impressed with the worship at PLNU. Flickering white candles on the stage lit several modern icons of the life of Christ as we sang the songs printed on the large screens at the front. I loved that in the pauses between lyrics, Scriptures associated with the songs were posted for us to read and meditate upon. At times we read these Scriptures to ourselves; at other times we were led in reading them aloud in unison, a beautiful act of worship.

I went drove E back to her dorm and met her RA and some of her near neighbors in Nease Hall before driving twenty minutes to my parents' home in Pacific Beach where I spent the night. At 8:30 AM after a stop by Starbucks for yogurt and granola and a venti hot water in which I used my own brand of Irish Breakfast Tea, I met E back on campus to attend the second session in Brown Chapel which covered academics. While the parents met for a Transitions workshop and for Breakout sessions (I attended the one on Study Abroad since E is very interested in the Lit Department's biannual London Campus), Elizabeth attended other workshops on strengths and adjustments to college life.

I ate a boxed lunch with another parent from Heritage Christian School while E ate with her Facebook friends in the Nicholson Commons--which is still called "The Caf" by students. We then attended the third General Session on finances and then the Resource Fair where we visited The Point Weekly table (the newspaper) and the Lit Department displays. I told Rachel, the lit department assistant, about some of my projects I'm working on and, after showing her my 1928 Book of Common Prayer, she practically drooled all over it, so I promised her a copy if Father Acker had any left.

Elizabeth and I took a quick trip to Target to get a few things for her dorm room like contact paper for her bulletin board and some drinks for the fridge, returning in time for the Resource Fair drawings, after which we ate dinner on the lawns again and then walked to Brown Chapel for the closing session, a covenant service.

The New Student Covenant Service was incredible. Rev. George Williamson led worship again...I really love the way he brings us into God's presence, plus he was joined that evening by Dr. Kim Bogan, Director of Academic Advising, who leads the Voices of Praise Gospel Choir. After President Brower spoke, he led us in the Prayer of Dedication and Covenant, one of the most touching ceremonies I have attended. (Yes, I had tears gushing down my cheeks and even made E cry a bit, too....)


President Brower: We celebrate and rejoice together in new beginnings in new places. The mission statement of the University reads as follows:


Point Loma Nazarene University exists to provide higher education in a vital Christian community where minds are engaged and challenged, character is modeled and formed, and service becomes an expression of faith. Being of Wesleyan heritage, we aspire to be a learning community where grace is foundational, truth is pursued. and holiness is a way of life.

Faculty/Staff: We welcome you as students and families to PLNU--a gathering of fellow travelers on this journey of spiritual and academic growth as we seek fullness in Christ.


Parents and Sponsoring Adults: To our sons and daughters--we are proud of your past achievements and of the people you are becoming by God's grace. We look froward to watching you continue to grow.


Students: To our parents and family members--we are grateful for your guiding presence in our lives that has prepared us for this moment. Your lives of faith lived before us have paved the way for this next phase of our journey.


Parents and Sponsoring Adults: To the faculty and staff--our student's circle of relationships now widens to include you. Challenge their minds, encourage their spirits, support their efforts to grow, model Christ's gracious love.


Faculty/Staff: We thank you for the confidence you are placing in us. We will endeavor to be faithful to our mission. Pray for us as we pray for you and your students.


Students: We are excited by the challenge of the days ahead. Pray for us as we pray for those sending us and those who are receiving us.


Faculty/Staff: New Students, you stand at the beginning of your academic careers. Your academic slate is waiting to be written upon and we welcome the enthusiasm that comes with wide open options. Transfer students, we look forward to the sharing of your experience and knowledge with a new community.


Students: We appreciate the gift of our education. Our individual journeys have brought us to this place and time and we prepare to move into our futures. We know that we are not alone, our fellow students, faculty, staff, and our families journey with us.


Parents/Faculty/Staff: Believing that the God who began a good work in you will continue to be with you, with enthusiastic determination make the most of your unfolding opportunities. Carry with you the knowledge and commitment of our love, the support of the PLNU community, and the reality that God loves you even more profoundly than we can.


All: Thanks be to God who is able to do immeasurably more than all we ask or imagine.


President Brower: Let us make this covenant together:

All: We covenant:
To be a people who together seek to love God with all of our hearts, minds, and bodies. To strive to love one another in thought, word, and deed. To continue to grow as a community formed by our worship of God, through Christ by the power of the Holy Spirit.


President Brower: Lord, we are your people. You have gathered us from around the world to join as one in purpose and mission. Unite us in our desire to glorify Your Name in our pursuit of excellence in academic preparation, wholeness in personal development, and faithfulness to Christ in character and service. This being our purpose, we now make this covenant in the Name of the Father, and the Son, and the Holy Spirit. Amen.

After the service, during which we laid hands upon our students, and those students without parents present had hands laid upon them by faculty and staff at the front of the chapel, we were sent to one wall which held small papers with each students' name: seed papers that we can plant and will grow into flowers, symbolizing the spiritual, academic, and social growth of our students during their time at PLNU. I drove E back down the cliffs to her dorm and helped her unpack a little more. But before long I left, with her standing under a streetlight outside her dorm level door, waving a little sadly as I drove away.

Elizabeth had a good first week on campus, despite being a little homesick. Her favorite classes are German (with my former German professor who teased her about "having flashbacks") and Writing 110 (freshman composition--a class I used to teach). She also has tennis, Biology 102, and Introduction to Theater. She met with the staff of The Point Weekly and submitted her first story on Thursday, an opinion piece on New Student Orientation.

Actually, I think she may have missed the dachshund (who sleeps in her bed) more than she missed the rest of us....

Posted by Susanne Barrett at 9:05 PM

Email ThisBlogThis!Share to TwitterShare to FacebookShare to Pinterest
Labels: Family, In the City, Worship

Thanks for sharing this Susanne, it sounds like a wonderful place for Elizabeth to be, I shall continue praying for you all x x x x x x