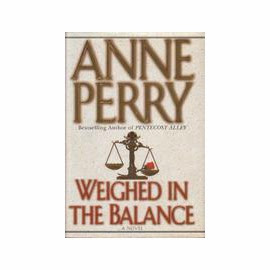 As I browsed the stacks at our county library branch--the social hub of our small town--I found myself collecting quite an assortment of books for summer reading. Not, of course, that I don't have a tottering stack of my own books to read this summer as well, but there's something about a little light reading that seems irresistible when one is faced with summer heat and bright sunshine.

So here are the books I picked up to read, along with a list of books I hope to get to:

Weighed in the Balance by Anne Perry (1996). I have long been a fan of Perry's Thomas & Charlotte Pitt series, but not so much a fan of her Monk books. This mystery seems to be outside the realm of both series (although its listing under the Monk titles in the front of the book worries me slightly). I admire the Pitt series because of the teamwork of the husband-wife characters--Thomas' compassion and insight balances nicely with Charlotte's inquisitive mind and upper-crust connections. The minor characters are well-drawn, too, and the whole series is simply delightful--if solving rather gruesome crimes in Victorian London can be deemed "delightful." Perhaps "enjoyable" is a better term....

The Ghost and the Haunted Mansion by Alice Kimberly (2009). A new series that I was tempted to try, and I finished this one--and seriously doubt I'll read any more of the series. It's an intriguing premise: a widow with a son is haunted by the ghost of a 1940's private investigator who helps her solve crimes in her Rhode Island town. All the 40's slang really got on my nerves after the first few chapters, and the writing is rather flat. A "cute" mystery, but I've never been one to go for "cute" anything.

Me and Mr. Darcy by Alexandra Potter (2007). I checked this book out earlier in the year but never had time to read it. I've enjoyed some of the modern Austen take-offs of recent years but certainly not them all. I will give this one a try since it keeps grabbing me whenever I browse the fiction shelves. I'll let you know....

Hangman Blind: A Mystery by Cassandra Clark (2008) A medieval mystery (my attention is immediately captured by the combination of those two words) by a debut novelist definitely draws me in--the first of what seems to be a new series set in medieval England (Yorkshire, to be precise) just before the War of the Roses. The cover art and beautiful title font reached out and grabbed me. The reviews on the back cover mention "astonishingly beautiful prose" and "rich tapestry" and "in the age of Chaucer" and "Medievalists rejoice!"...so of course I'll have to give it a go.

My Sister's Keeper by Jodi Picoult (2004). I read almost half of this book in an airport bookshop when stuck in Albany due to a four-hour delay in returning home with Elizabeth from a visit to my college roommate/the kids' godmother. We're reading it for Logos as well, so I thought I'd get an early start on it, too. I may return it unread and wait until our next meeting to read it (since we didn't have enough people to meet in June and therefore will be discussing The Great Divorce in July). And, no, I haven't seen the movie and don't plan to until after I've read the book.

Then I have books of my own that I've been wanting to read. My "to read" stack is almost ready to keel over with the next earthquake; in fact, I'm surprised it didn't crash to the floor with Wednesday's rather exciting 5.4 quake a mere 25 miles from our home. But here are some of the books I hope to peruse this summer:

Wuthering Heights by Emily Bronte (1847). Okay, so I'm rereading this book for the third time because of the Twilight series--Elizabeth even bought herself a copy with the Twilight-style cover. I've never cared for this one Bronte novel--I've read almost everything Charlotte and Anne wrote, but I've never been able to stomach Emily's attempt. I somehow keep blocking it from my mind--all I can remember are the three main characters' names. I hope I'll like it better due to the Twilight connection, but I rather doubt it.

Harry Potter's Bookshelf by John Granger (2009). Elizabeth bought this book for me for Christmas, and I'm still slowly wending my way through it. All I can say is that it's a good thing I have a Master's in English or half of what Granger writes about would go flying over my head. But I am enjoying the way he traces the literary associations in the Harry Potter series so thoroughly. I understand that he's working on a similar project for the Twilight series. I first came across Granger when I read Looking for God in Harry Potter in which he traces the Christian themes and imagery inherent in Rowlings' books--and he does so brilliantly. I highly recommend Looking for God in Harry Potter to any Christian parent who questions whether Christians should consider reading the Potter series.

The Showings of Julian of Norwich (14th century). The Norton Critical Edition is definitely the way to go when reading medieval mystics. I've read short excerpts of Julian's work, but I really want to tackle the entire book, written by the first English woman to be identified as an author. If I ever return to graduate school to pursue my Ph.D., I hope to work with the medieval women mystics, Julian of Norwich and her friend and neighbor, Margery Kempe (I also have a Norton Critical Edition of Margery's work as well, but one mystic at a time....)


Evangelicals on the Canterbury Trail by Robert E. Webber (1989). I read this book hurriedly a few years ago and want to reread it more carefully now. The subtitle of the book is: "Why Evangelicals Are Attracted to the Liturgical Church." Since I am an evangelical very much attracted to the liturgical church and to Anglicanism in particular, I want to revisit this little book in detail.

I have other books I want to read--just take a look at my reading list in the sidebar--but I think these will keep me busy until we start school in late August. So, what are you reading this summer? Anything worth sharing? Mysteries especially???? Please, do tell!


Reading along with you,

Posted by Susanne Barrett at 10:41 PM

Twilight and Wuthering Heights? Um? I find that hard to understand. Wuthering Heights is about an obsessive, incestuous relationship between two extraordinarily selfish people who really only care about their own feelings, not those of their beloved. Its profoundly well written, Emily was definitely the most talented of the three sisters, but it isn't everyone's taste that's for sure! But my mind boggles how a book like Twilight could be connected to it. Please do tell! :-)

I'm glad you are okay despite your recent earthquakes :-)

Posted by HisFireFly and accidentally deleted:

My husband and I just watched the movie My Sister's Keeper last week. Quite unusual and intense.. will be interesting to hear what you think of the book.

Thanks for posting, HFF. I'm so sorry: I accidentally deleted your comment in deleting another comment that was not appropriate. I can't wait to see the movie, although I understand that the ending is different from the book. We shall see. :)

The connection between Meyer and Bronte is something that Meyer develops in Eclipse. Edward and Bella have a conversation about Wuthering Heights when he can't understand why Bella keeps reading and rereading it. Quotes from WH are used multiple times in Eclipse, and it made me want to reread WH to see if there was ANYTHING of redeeming value in it. I've read it twice, hated it twice, and keep blocking it from my memory. So I guess I'll try to read it, again....

Susanne, I'll tell you the same thing someone told me - just because it is by Bronte (or insert other classic author) doesn't mean it's good. For example, I think Jane Eyre is not a particularly well-written book. Value is in the eye of the reader.

I've read all the Twilight books, but didn't remember that connection. To be honest, there isn't much I remember from them (except some awfully graphic scenes that will probably be with me forever, lol!)

Thank you for explaining it to me :-)

Oh, I know, Sarah--just because a book is a "classic" doesn't mean that it's necessarily a great book. I have torn Lord of the Flies in half and handed it back to my British Lit professor in college because I hated it so much. That book sickens me--makes my physically ill. Ugh!

I love Jane Eyre for the characters and themes, but the "deus ex machina" at the end annoys me. Have you read The Eyre Affair by Jasper Fforde? It's hilarious--and "explains" the "new ending" of Jane Eyre. Fforde's Thursday Next series is brilliant, filled with inside jokes that literature lovers will find absolutely LOL-funny. :) I prefer Villette and The Professor in some ways over Jane Eyre.

The conversation in Eclipse about Wuthering Heights is really quite funny. I posted it on a discussion forum recently, so I'll copy it here for you, just for fun:

"I'm glad Charlie has decided to let you out--you're sadly in need of a visit to the bookstore. I can't believe you're reading Wuthering Heights again. Don't you know it by heart yet?"

"Not all of us have photographic memories," I said curtly.

"Photographic memory or not, I don't understand why you like it. The characters are ghastly people who ruin each others' lives. I don't know how Heathcliff and Cathy ended up being ranked with couples like Romeo and Juliet or Elizabeth Bennet and Mr. Darcy. It isn't a love story, it's a hate story."

"You have some serious issues with the classics," I snapped.

"Perhaps it's because I'm not impressed by antiquity." He smiled, evidently satisfied that he'd distracted me. "Honestly, though, why do you read it over and over?" His eyes were vivid with real interest now, trying--again--to unravel the convoluted workings of my mind. He reached across the table to cradle my face in his hand. "What is it that appeals to you?"

His sincere curiosity disarmed me. "I'm not sure," I said, scrambling for coherency while his gaze unintentionally scattered my thoughts. "I think it's something about the inevitability. How nothing can keep them apart--not her selfishness, or his evil, or even death, in the end...."

His face was thoughtful as he considered my words. After a moment he smiled a teasing smile. "I still think it would be a better story if either of them had one redeeming quality."

"I think that may be the point," I disagreed. "Their love is their only redeeming quality."

*****
Well, I guess I'll see if I can find *any* redeeeming qualities" in Wuthering Heights after all. :)