Burn the Floor: One Hot Night! 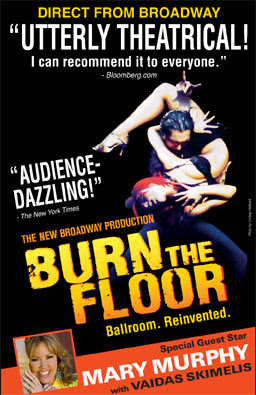 Through Jen at Mommy of Many, I won two tickets to see the opening night of Burn the Floor at the San Diego Civic Theater.

Once we arrived at the Press Table, we were given upgraded tickets...in the orchestra level, only about twelve rows from the stage, and right on the aisle which was soooo nice. The ladies at the Press Table asked if an aisle seat would be easier for me with my cane, and it certainly was. The tickets would have cost us $109...each.

As fans of So You Think You Can Dance from Season 2 (now working on Season 8), Elizabeth and I were thrilled to see two of our favorite ballroom couples, both married to each other: Ashleigh and Ryan, and Anya and Pasha (pictured below). We were soooo excited! Pasha especially has been our long-time favorite and the recipient of many of our votes during the season he was competing. And it was wonderful to see both Anya and Pasha on the most recent season as returning All-Stars.

My favorite section was "Things That Swing" because I adore music of the 30s, 40s, and 50s. Anya and Pasha were incredible in the final two numbers, "The Dirty Boogie" (Jive, Lindy, and Swing) and "I'm a Ding-Dong Daddy" (Quickstep, Lindy, Jive, Swing). At the very end of the final number before the intermission, several dancers were jiving in the aisles, and both Anya and Pasha passed within ten feet of us.

Mary Murphy, a San Diego native and owner of the Champion Ballroom in San Diego (where I have been to watch a friend's daughter perform), was the guest performer and she was wonderful! Magical, in fact. Her first few dances were waltzes, but she finished the night with some wonderful Jive and Cha Cha, especially the closing two numbers, "Proud Mary" and "Turn the Beat Around." 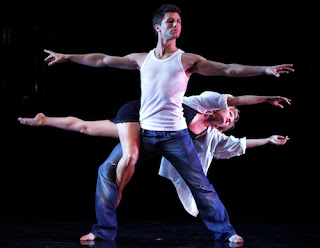 And the Rumbas with Anya and Pasha (pictured above doing their Rumba) and Ashleigh and Ryan were superb! Usually Rumba is my least favorite of the dances, but these romantic dances, between husbands and wives, were heart-felt and beautifully danced. Simply lovely.

The evening flew by...so quickly. The live band was amazing, the singers (Peter Saul and Vonzell Solomon) coming down onto the dance floor and becoming part of the show rather than just the "background" music.

Burn the Floor featured "international style," which has been danced competitively since 1920; ballroom is comprised of ten dances: five Standard Dances (Waltz, Foxtrot, Tango, Viennese Waltz, and Quickstep) and five Latin Dances (Cha Cha, Paso Doble, Rumba, Samba, and Jive). And we saw ALL of them last night, plus a few others like Lindy, Swing, and Salsa. Wonderful!!!!

Burn the Floor was absolutely, completely one of the most amazing evenings I've spent. Elizabeth and I came out of the theater smiling from ear to ear, still not believing that we had seen these amazing dancers for the past two hours. As we drove back to her college, my daughter declared, "I will never forget this night!"

Burn the Floor continues through Sunday, October 17 here in San Diego, so if you live here in America's Finest, then dance, don't walk, right to Burn the Floor!

With sincerest thanks again to Jen at Mommy of Many for the tickets,

Posted by Susanne Barrett at 10:18 PM

It was incredible, Jane! Wish you could have come! :)